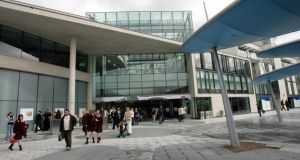 Whitewater Shopping Centre’s Ingrid Ryan has been named all-Ireland manager of the year at the 2015 Spectre Awards on the back of strong growth in customer numbers and spending at the Kildare venue.

Ms Ryan received the award at a ceremony at London’s Dorchester Hotel from John O’Donoghue, chief executive of sponsor, Noonan.

Graham Parker, editor of Shopping Centre magazine and the head of the judging panel, said at he ceremony that the growth achieved by Whitewater during the year made Ms Ryan a deserving winner.

“Footfall increased in 2014 by over 6 per cent, making 2014 a record year with average spend increasing across all sectors; 2014 also saw the strongest turnover on record since the centre opened in 2006,” he noted.

Ms Ryan thanked Spectre and her colleagues at Whitewater and paid tribute to the centre’s loyal customers.

The centre in Newbridge, Co Kildare, has more than 70 shops and employs 1,000 people. It is Ireland’s biggest regional centre.