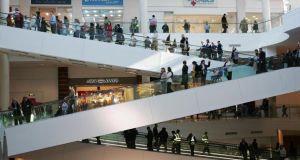 This follows confirmation on Tuesday of their joint purchase of Project Jewel from the National Asset Management Agency for €1.85 billion. The loans are connected with Irish property developer Joe O’Reilly and his company Chartered Land, and represented the biggest sale to date by Nama.

The portfolio includes the existing Dundrum Town Centre and a nearby development site in the village covering six acres. These loans are being jointly purchased by Hammerson and Allianz.

Hammerson is also acquiring the loans connected with Chartered Land’s 50 per cent shares in both the Ilac and Pavilions shopping centres in Dublin, and a five-acre city centre site bounded by O’Connell Street and Moore Street.

This means that Hammerson will pay €1.23 billion of the overall cost with Allianz paying €620 million.

“We will have a good understanding of what the potential site could be over the next one to two years,” Hammerson’s chief executive David Atkins told The Irish Times. “There’s no immediate hurry on those. The first stage is to really establish what’s appropriate.

“We are a long-term investor with very supportive shareholders, so it’s about getting this right not just the speed of execution. We can afford to take our time and bring forward the best developments.”

This was echoed by Annette Kroger, chief executive of Allianz Real Estate Germany. “We have one or two years time to think about that,” she said.

Both parties also expressed the hope of reaching a consensual agreement with Mr O’Reilly and Chartered Land on taking ownership of the underlying assets and did not rule out a role for the Irish developer in the future.

“Our primary objective here is to come to a consensual agreement with Chartered Land,” Mr Atkins said, adding that he had “huge respect” for Mr O’Reilly.

“I wouldn’t rule anything out in terms of their potential future involvement with us in terms of making the most of these assets and the development opportunities.

“They have intimate knowledge of the assets and the development opportunities. What we bring is a wider experience of the European shopping centre market. We think there’s potential of working together but obviously we’ve got to sit down and work out what that might look like.”

Ms Kroger confirmed that Allianz had wanted to purchase the Dundrum loans for more than three years and sought to buy them off market. “We had conversations on and off Nama but they always made it clear that they would run an open process given the size of the loans,” she said.

Mr Atkins hopes to attract a number of premium retailers to Dundrum, including Apple, Victoria’s Secrets, Ted Baker and Mango.

“We believe that by adding further retailers, and caterers and leisure operators into the scheme we can make it even better,” Mr Atkins said. “There are some names that are absent at the moment.”

“We’ll have a long, hard think about what’s appropriate for this development,” he said.

This transaction means that Ireland will account for about 15 per cent of Hammerson’s business and Dundrum will be the largest shopping centre in its portfolio.

Dundrum has contracted rent of €60 million a year, while the Pavilions produces an annual rent of €15 million and the Ilac €10 million. Dublin Central achieves rents of €2.4 million currently. The underlying property assets will have an initial yield of 4 per cent.