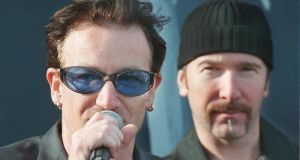 U2 are to buy the site where they recorded many of their best-selling albums after the Dublin Docklands Development Authority (DDDA) agreed to sell it for about €450,000.

The authority forced the band to sell its old riverfront studio on Hanover Quay for an undisclosed price in 2002 to allow public amenity works relating to the development of the Grand Canal Harbour area. As part of that deal the authority promised the band the top two floors of the 32-storey tower it was planning to build on an adjacent quay, a project that was subsequently put on hold.

The authority said in a statement issued on Tuesday that in light of its imminent dissolution and the recent approval by An Bord Plenala for the North Lotts and Grand Canal Planning scheme, it would not be proceeding with a proposed compulsory purchase order of 16 and 18 Hanover Quay.

It said that Jones Lang LaSalle, acting on behalf of U2, was to acquire the authority’s interest in the site at 16 Hanover Quay.

The historic site is where U2 recorded many of their best-known albums.