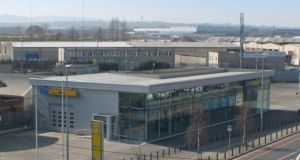 Toyota has bought a prominent motor showrooms and workshop at Longmile Road in west Dublin.

But with a larger number of inquiries and offers than expected from the motor trade Toyota stepped in with a knockout bid of €2.8 million.

The 1,044sq m (11,237sq ft) premises standing on a 1.1-acre site had been rented by the Frank Keane motor group until it availed of an opportunity to exercise a break option and vacate the premises last December.

That business later transferred to the former Bill Cullen Renault facility at Liffey Valley which was sold to Frank Keane for a figure believed to be about €2.5 million.