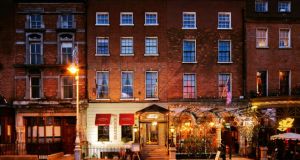 The boutique Dawson Hotel opposite the Mansion House in Dublin has been sold by an AIB-appointed receiver for €17.5 million to Tetrarch Capital, the owner of the Marker, Mount Juliet and Citywest hotels.

AIB appointed Declan McDonald of Price Waterhouse Coopers as receiver on foot of loans taken out by the hotel’s former owner, businessman Louis Murray. He bought the hotel for €8.5 million in 1999 and spent at least another €6 million revamping the luxury property.

Tetrarch said it is planning a “substantial investment in the redevelopment and expansion” of the hotel, but declined to give further details.

Due to the fact that Tetrarch now owns eight hotels, the deal is subject to approval from the Competition and Consumer Protection Commission, although this is likely to be a formality.

Tetrarch is also in exclusive negotiations to buy the Millennium Park commercial park and development lands in Kildare from a Nama-controlled developer, with a price mooted to be well over €35 million.