Summary judgment of €8m made against ex-bankers 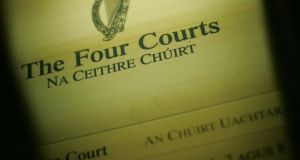 The proceedings by Promontoria (Aran) Ltd came before Mr Justice Brian McGovern in what he described as “highly unusual circumstances” arising from an objection by Mr Browne to Mr Justice Max Barrett having heard them last May.

The objection was made on July 24th 2017, weeks after the May hearing and 13 days after Judge Barrett gave judgment, ruling the fund was entitled to some €8 million in total against John Hughes, his wife Margaret, and Mr Browne. Apart from a sum of about €503,000, there was no arguable defence to the claim for summary judgment in the amounts sought, Judge Barrett held.

Mr Browne’s objection was based on Judge Barrett being a former company secretary of Irish Bank Resolution Corporation, which took over Anglo, at a time IBRC decided to take separate proceedings against Mr Browne seeking judgment for some €50 million.

On July 24th, Mr Browne and his solicitor Paul Meagher swore affidavits grounding an application for Judge Barrett to recuse himself. Mr Meagher swore he had no knowledge of any possible conflict of interest on Judge Barrett’s part until Mr Browne approached him (Mr Meagher) after the judgment was delivered.

What is “extraordinary” is Mr Browne himself held a senior executive position in IBRC. One would have thought, had Mr Browne attended court last May, he would have immediately identified the connection between himself and Judge Barrett of which he now complained but it seemed Mr Browne had let John Hughes “make the running” so far as these proceedings were concerned and to represent the interest of all the defendants.

Judge Barrett had decided, “out of an abundance of caution” to recuse himself despite his judgment having been delivered. The judgment had not, however, been perfected and has been vacated.

Judge McGovern said the only material change since July was the fund is no longer pursuing its claim for judgment for the €503,000 sum against Mr and Mrs Hughes.

Having reheard the fund’s proceedings, Judge McGovern said he agreed with, and adopted, Judge Barrett’s findings the fund was entitled to summary judgment in the sums sought, except in relation to the €503,000 sum no longer being pursued.

It was “wholly unsatisfactory” scarce court resources had been taken up with hearing this matter a second time when that could have been avoided had Mr Browne taken a “more proactive” role when the case was before Judge Barrett, he added.

1 Air travel never going ‘back to way it was’
2 Should I switch bank now with Ulster Bank at risk of closing?
3 Stripe wins more corporate customers, announces Salesforce deal
4 Irish company to test vaccines on volunteers deliberately infected with Covid-19
5 Eir takes on extra staff as ComReg chases it on complaints
6 Coronavirus vaccine: 15 billion doses needed to inoculate the planet
7 How to . . . move (almost) everything to your new phone
8 Weaknesses of food industry
9 Death of Nicholas Leonard, founder editor of Irish Times business section
10 Bank of Ireland sees more than 1,400 staff apply for redundancy
Real news has value SUBSCRIBE