Rent of over €200,000 could be achieved for partially let block at Northern Cross 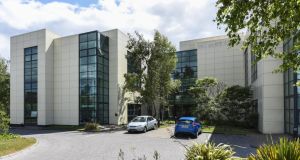 Leona Mullen of Savills is guiding €2 million for the three-storey building in City Junction Business Park which was developed in the early 2000s by Walls Construction and is now to be sold on the instructions of receiver Grant Thornton.

Grattan House is about 50 per cent let and produces a rent of €120,000 per annum. The agent said that with potential to push the rent above €200,000 with the letting of the vacant space, an investor could get a return of about 10 per cent after deducting standard purchasing costs.

About half of the space is let to Fresenius Medical Care (Ireland) which occupies the ground and part of the first floors on a 20-year, seven-month lease from 2005 at a passing rent of €120,000. The lease has just over 10 years to run. Fresenius is a major provider of products and services for patients with chronic kidney failure.

The vacant space is already fitted out to a high standard, according to Ms Mullen. She said Savills was expecting considerable interest in the sale which puts a capital value on the block of less than €90 per sq ft.

1 Why are markets booming when a crash is on the way?
2 How much do Irish people earn? And what will Covid-19 do to our wages?
3 Drumcondra credit union collapses as merger plan fails
4 No free lunch on coronavirus cash payments
5 Could your old car be giving away all your secrets to its new owner?
6 Businesses given five days to get Revenue-ready for Covid-19 tax relief
7 Digicel warns of Covid-19 hit after first earnings rise in years
8 Permission sought for €150m film and media campus in Wicklow
9 Government’s budget deficit balloons to €5.3bn on back of Covid spending
10 Aryzta needs to sell €600m of assets to reset business, shareholders claim
Real news has value SUBSCRIBE