Over €10m for period bank hall on O’Connell Street 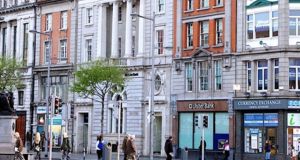 DTZ Sherry FitzGerald is quoting €10.025 million for 2-4 Lower O’Connell Street, Dublin 1, which is fully let to Ulster Bank, with a parent guarantee from Royal Bank of Scotland. Ulster Bank’s 30-year full repairing and insuring lease dates from December 2007 and has an unexpired term in excess of 23.5 years. It currently generates €549,856 per annum.

Unusually, the lease is subject to annual rent reviews based upon the United Kingdom Retail Price Index (RPI) subject to an annual cap at 3 per cent – the UK RPI has averaged about 3.4 per cent over the past 30 years.

Net initial yield The vendor, British financial services company Legal & General, is also proposing to top up the rent to €608,938 until the December 2017 rent review. After allowing for standard purchaser’s costs of 4.46 per cent, this reflects a net initial yield of 5.81 per cent.

Legal & General is selling because of new corporate governance rules which limit exposure to any one client.

The building was last on the market at the height of the boom, in 2007, when Ulster Bank sold it on a sale-and-leaseback basis.

Located on the east side of Lower O’Connell Street, between O’Connell Bridge and Middle Abbey Street, the building comprises two interconnected five-storey over-basement period structures. The freehold property extends to 1,130sq m (12,160sq ft) and the space is arranged to provide a banking hall on the ground floor, storage and ancillary space at basement level and offices on the upper floors.