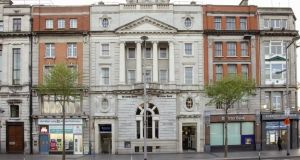 A Norwegian investor has paid €11,437,000 for a landmark building at 2-4 Lower O’Connell Street, Dublin 1, which is let to Ulster Bank on a long-term basis.

The initial yield will be 5.08 per cent after allowing for standard purchasers costs.

DTZ Sherry FitzGerald had been guiding €10,025,000 for the freehold interest in the bank building which has a parent guarantee from Royal Bank of Scotland.

Ulster Bank’s 30-year full repairing and insuring lease dates from December, 2007, and has an unexpired term of 23 years.

Unusually the lease is subject to annual rent reviews based on the United Kingdom Retail Price Index (RPI) subject to an annual cap of 3 per cent.

The UK RPI has averaged 3.4 per cent over the past 30 years.

The vendor, British financial services company Legal & General, topped up the rent to €606,938 until the December, 2017, rent review, guaranteeing that the investor can expect a net yield of 5.08 per cent.

Located on the east side of Lower O’Connell Street, between O’Connell Bridge and Abbey Street, the building comprises two interconnected five-storey over basement period structures.

There is a banking hall on the ground floor, storage and ancillary space at basement level and offices on the upper floors.

Clive Roche of DTZ Sherry FitzGerald acted for the vendor while Michelle McGarry of Colliers International advised the purchaser.

1 British exceptionalism backfires in style as Johnson tests positive for coronavirus
2 Wetherspoon’s panto-villain chairman may have the last laugh
3 UK needs to be honest about its Covid-19 strategy
4 Will Covid-19 force Primark to rethink decision not to sell online?
5 Retail landlords worried rents will dry up during Covid-19 crisis
6 Remote working doesn’t suit everyone, and it exposes woolly leadership
7 Volkswagen burning through €2bn in cash per week
8 Usit travel group in liquidation due to coronavirus crisis
9 ECB orders banks to freeze dividends and share buybacks
10 Interim examiner appointed to food distribution companies
Real news has value SUBSCRIBE