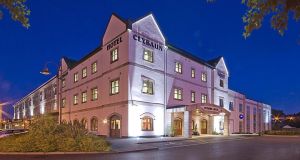 The 92-bed hotel was put on the market last June by receivers acting on behalf of Ulster Bank after an umbrella company operated by former owner Chris Crehan racked up debts of almost €90 million.

Northern Ireland businessman Tom O’Gorman, who famously turned a £1 investment in Cove Energy into a holding worth €8.8 million, has acquired the Clybaun hotel in Knocnacarra, Galway in a deal valued in excess of €3 million.

The deal comes almost a year to the day since Mr O’Gorman acquired the Blarney Gold Resort in Co Cork for an estimated €2.5 million.

Mr O’Gorman is a 40 year veteran of the oil exploration and mining industries, investing in companies such as Minmet, Glencar, Pan Andean and Minco, but his biggest payday came with the sale of the aforementioned Cove Energy to the Thai Government owned PTTEP for € 1.9 billion in June 2012.

The Clybaun, which was previously valued at €13 million, was formerly owned by the well-known Galway property developer Chris Crehan, who lost control of his business empire in late 2011 after racking up debts of almost €90 million.

The 92-bed hotel was put on the market last June by receivers acting on behalf of Ulster Bank after an umbrella company operated by former owner Chris Crehan racked up debts of almost €90 million.

The Hotel Clybaun, which also has a popular leisure centre, was offered for sale on the instructions of the joint receivers, Patrick Dillon and Michael McAteer of Grant Thornton.

While a majority shareholder in the deal, Mr O’Gorman has co-invested in the Clybaun Hotel with property asset management specialists, Capital Assets. The company advised on the purchase deal and will spearhead a €1 million hotel refurbishment and management team.

“Now that the deal is complete, we will immediately embark on a major redevelopment of the Clybaun Hotel that will help transform this hotel to its former glory as a flagship destination that services the busy suburb of Knocknacarra,” said Mr O’Gorman.

The businessman said further acquisitions were on the cards.

“We are targeting the transformation of under-performing mid-range hotels in good locations into high-performance hotels with profitable trading profiles,” he said.

10 Residential sites in Cabra and close to Newcastle village