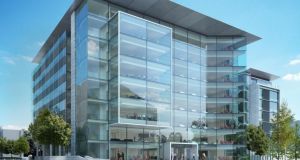 CGI of Block H in Central Park, Leopardstown: it will be completed in December 2016

The early success of the letting campaign will provide a further boost to the park, where development work is under way on a further office building, Block H, which will have 13,656sq m (147,000sq ft) of lettable space when completed in December 2016.

Green stands to earn €1.527 million per annum from the lettings to Sage Hibernia (Services) Ltd and MasterCard Ireland. Sage has taken a 20-year lease of 4,199sq m (45,200sq ft) on the ground and first floors of Block G with a 14-month rent-free period.

The tenant will have a break option after seven years. The letting is the largest in the south suburbs this year.

Jim O’Reilly of Knight Frank, who acted for the landlords, said the letting was “another fantastic result for Central Park which has consistently attracted quality companies”.

Paul Finucane of Colliers, who advised Sage, said that apart from being a high quality workplace, Central Park offered good transport and other amenities, ensuring an exceptional working environment for Sage staff.

Ann Louise Hannon of CBRE,who acted for the landlord, said the MasterCard transaction was testament to the quality of Central Park as “MasterCard had chosen to expand and grow within the development”. Fionnuala O’Buachalla of JLL advised MasterCard.

The two lettings follow the announcement that Hostelworld owner Web Reservations International had leased 2,357sq m (25,370sq ft) on the second floor of Block G at a rent of €255 per sq m (€23.68 per sq ft)

Ronan Webster, asset management director of Green Property REIT, said that since acquiring the business park in March 2014, it had secured office lettings for 8,286sq m (89,000sq ft) of space.

1 Belgium helps Ireland to a Brexit boon
2 ‘My rent here is so low it’s a joke’
3 New Powerscourt Springs hotel to open in defiance of virus gloom
4 Can Grafton Street stop the flood of closures?
5 This charming man: how Paschal Donohoe won the Eurogroup presidency
6 ‘Sad day’ for House of Ireland as tourism retailer goes out of business
7 Donohoe’s new role puts State at centre of debate over EU’s future
8 Goodbody loses a second suitor as Bank of China deal falls through
9 Pharmaceutical industry signals it won’t extend drugs agreement
10 Why gift a son now if it eats into his tax-free inheritance threshold?
Real news has value SUBSCRIBE