Lough Erne resort sold to US investors for estimated €11m 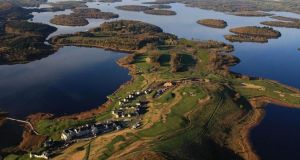 The five-star, 600-acre property sits on its own peninsula between the shorelines of Lough Erne and Castle Hume Lough, close to Enniskillen

Northern Ireland’s only five star resort has been sold for an estimated €11 million to a group of US investors led by financier Michael Saliba, it was confirmed on Monday.

The Lough Erne resort in Fermanagh, which hosted the G8 summit of world economic leaders in 2013, had been on the block since Bank of Scotland placed it under the charge of administrators John Hansen and Stuart Irwin of KPMG since May 2011 on foot of a €33 million secured debt.

CBRE, which confirmed completion of the sale on Monday, were instructed to bring the resort to market in May 2013.

A US investment group led by Vince Avenue, which is headed by Mr Saliba and Tru Hotels and Resorts, a hotel investment and management company founded by American hoteliers Jeff Mahan and Mark Ward, have acquired the property. Tru has been appointed to oversee the management of the resort.

The five-star, 600-acre property sits on its own peninsula between the shorelines of Lough Erne and Castle Hume Lough, close to Enniskillen.

Businessman Jim Treacy developed the combined hotel and golf course with the aid of a £26 million (€33 million) loan from Bank of Scotland. The business fell into financial difficulty following the financial crisis, and the lender had its holding company, Castle Hume Leisure, placed in administration in 2011.

The resort won the Northern Ireland Tourism Board’s ‘Hotel of the Year’ award last year, and it was recently selected to host the 2017 Irish Open golf tournament.

1 In this strangest of recessions, what happens next for Ireland?
2 Michael O’Leary is the boss you want to lead an airline out of crisis
3 Bank of Ireland sees about 2,000 staff apply for voluntary redundancy
4 Ireland’s Covid-19 economy in five graphs
5 Overhaul of lease arbitration regime would be a game changer for retailers
6 Should I switch bank now with Ulster Bank at risk of closing?
7 Minister seeks AG’s advice on banker accountability laws
8 EY Entrepreneur of the Year: nominee profiles
9 Fortnite owner signs multimillion deal to buy Irish ‘kidtech’ firm
10 Estée Lauder staff at Dublin airport plan further strike action
Real news has value SUBSCRIBE