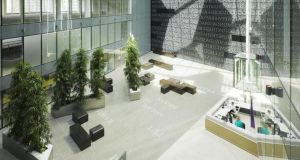 Leading law firm William Fry is expected to complete legal contracts shortly which will allow it to relocate to a high quality office building beside the Bord Gáis Energy Theatre in the south Dublin docklands.

An adjoining office block at Grand Canal Square is currently being fitted out for Facebook to enable it expand its European headquarters in the city.

William Fry is understood to be moving to 2 Grand Canal Square where it will occupy about 9,290sq m (100,000sq ft) alongside Capita, the UK’s largest outsourcing group.

Tenants moving in to Grand Canal Square will be paying the standard market rent for a new building – €322 per sq m (€30 per sq ft) on a 20-year lease with no break options.

The same block was occupied by another legal firm, Byrne Wallace, for a little over a year before it opted to return to its original offices on Harcourt Street in 2012.

During the property boom, William Fry was to have relocated to 4 Grand Canal Square, leaving Joe O’Reilly’s development company, Chartered Land, with responsibility for Fry’s existing lease of Fitzwilliam House at Wilton Place, next to the Grand Canal.

There are about nine years remaining on the €3 million a year lease. That deal was put on ice when the property market collapsed.

William Fry did not respond to calls from The Irish Times yesterday in connection with the proposed letting.

The company is one of the largest legal firms in Dublin with a staff of about 380.

All three blocks in Grand Canal Square with a total of almost 37,160sq m (400,000sq ft) were completed in 2010 by Chartered Land – under the watch of Nama – but with the exception of the 3,954sq m (42,460sq ft) occupied by Capita, have remained unoccupied because of the devastating recession.

Letting strategy
Under a carefully planned letting strategy – almost certainly devised by Nama – Chartered Land will be in a position to complete formal contracts with Facebook once the Fry deal has been sealed.

There is a similar volume of space available in block five which is expected to lease shortly because of the scarcity of well-located buildings of that size and standard.

Once all the lettings are in place, Nama will have the option of selling four office investments – Harcourt Street, owned by a consortium headed by Paddy Kelly and Alanis; 2 Grand Canal Square with William Fry and Capita in situ; 4 with Facebook as tenants; and 5 with another tenant.

Facebook is currently based at Hanover Reach, also close by in the south docklands, where it is renting 6,038sq m (65,000sq ft) from Ellier Developments.

The leases are due to run until next summer. Ellier is not expected to have any difficulty in finding a replacement tenant because of the superb location of the office block and the high standard of the fit-out. It adjoins an apartment block which was also developed by Ellier.

Facebook jobs
Earlier this year, Facebook announced that it would be creating another 100 positions at its European headquarters, bringing the number employed at the Dublin base to 500.

The company has experienced growth in markets across Europe, the Middle East and Africa.

Facebook has been in Ireland since 2009. Its Irish-based staff are involved in a broad range of functions from user operations, policy and safety to advertising and sales.

The Irish office has been responsible for users of the site outside the US.

Joint agents Bannon Commercial and Knight Frank are handling the lettings at Grand Canal Square. Facebook is being advised by DTZ Sherry FitzGerald.

1 Fair Deal nursing homecare leaves little for bills and gifts
2 Portugal set to curb tax breaks for wealthy foreigners
3 Getting out from under ‘never-ending’ Celtic Tiger debt burden
4 Pensions row fix could threaten future of State payment, actuaries warn
5 Tax and spend: What have FG done for your pocket?
6 Accumulated profits at Kathryn Thomas’s media company rise to €420,000
7 SAP hit by fall in cloud computing orders
8 Court asked to impose maximum disqualification on director
9 Pilita Clark: When a rude boss keeps you waiting, why not walk out?
10 Pound dips as Bank of England decision looms
Real news has value SUBSCRIBE