Is there still value in the Irish commercial property market?

The prospects for 2015 are good, but it depends on ongoing stability and consistency 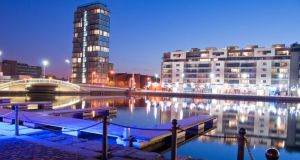 Grand Canal Docks: The returns achieved in Dublin makes it the top performing office location globally, as measured by MSCI Real Estate, with a remarkable total return to investors of more than 37 per cent in the first nine months of 2014

Last year saw sustained recovery in the Irish commercial property market with Dublin leading the way. Investors from all corners of the globe have been enthusiastically acquiring discounted assets as the great deleveraging of Ireland accelerates.

With this growing demand, will Dublin remain globally competitive as values surge and yields normalise? People are now beginning to ask if there is still value in Irish real estate.

To date Dublin has seen capital values surge by 30 per cent in 2014. The recovery has followed a similar pattern to that of the UK market, with offices in respective capital cities driving performance but with retail and regional properties lagging behind.

The returns achieved in Dublin makes it the top performing office location globally, as measured by MSCI Real Estate, with a remarkable total return to investors of more than 37 per cent in the first nine months of 2014.

Consequently, commercial property has significantly outperformed both Irish equities and bonds, despite the fact that these more traditional asset classes also performed strongly over the past year.

Investors have clearly noted this, as allocations to real estate in their portfolios have increased. This change is occurring not just in Ireland but globally, representing a trend likely to continue as interest rates remain low and returns from real estate attractive.

While the Dublin office sector may have led the way, the improving level of consumer confidence has now also boosted the retail sector. Since the start of the year, values in key locations such as Grafton Street and Henry Street grew by 24 per cent and 23 per cent respectively.

Outside of Dublin the market was still struggling. Significantly, the provincial retail sector, particularly in Cork, saw values finally return to growth in June. It is now likely that investors in such locations will record double-digit returns for 2014 due to a strong income return.

This means that allocators should continue to see Dublin as a good value prospect. Coupled with the expectation of more rental value growth, with current rents still 30 per cent off their peak, return prospects seem promising, even for new entrants to the market. The recovery in Dublin office values has been driven by two key factors: growing investor demand and improving market rents.

Crucially, the current strong performance is emerging in a different pattern to that of the speculative boom between 2004 and 2007.

It is hoped this will allay fears that we might be moving towards another bubble-type scenario, at least for the current cycle.

The recent boom and subsequent crash are often incorrectly attributed to record growth in rents which inflated capital values. In reality the surge in Irish commercial property values came from speculation, as investors piled in pushing prices upward.

Substantial rental growth only emerged as the primary driver of performance towards the end of the boom and continued until the 2008 global financial crisis. This was despite the fact that the investment market was already crashing and capital values declining from mid-2007.

The rental growth experienced in 2014 has been led by an improving economy and demand from occupiers. This has boosted capital values, thus delivering strong total returns for investors.

Notably, this is a sign of a fundamentally healthier market as investment performance is being driven for the right reasons, not purely by investor demand. Rental growth has now outpaced yield impact as the key driver of performance for three out of the last four quarters. The pricing of risk in the Irish market has continued to decline as fears around rent review reform, the sovereign bailout and the weight of bank liabilities eased.

Equivalent yields fell from a high of 9.8 per cent in early 2012 to 6.5 per cent by the end of September 2014, reflecting these improvements.

Nonetheless, investors continue to raise concerns regarding the security of the euro zone and political stability when moving into peripheral and even some core EU markets.

In the Irish property market, fears of political instability focus around a sooner than expected general election and concerns about the potential outcome. Such events may affect ongoing reforms and even the attractiveness of Ireland as a leading destination for foreign direct investment.

The 2015 prospects for the Irish market remain favourable. Pricing is still more competitive than other equivalent European markets, with further rental growth expected to come on stream as the economic recovery broadens adding to investor returns.

However, stability and consistency will be key to maintain such momentum.