Hotel near Dublin Airport for €9.6m

Premier Inn has benefited from increased tourism and business travel 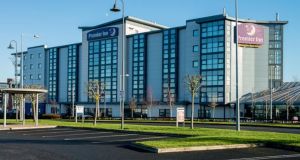 The 155-bed Premier Inn hotel at the entrance to Airside Retail Park near Swords, Co Dublin, which is being sold by Nama.

Fiona Kennedy and Colm Luddy of agents CBRE are guiding €9.6 million for the 155-bed Premier Inn at the entrance to Airside Retail Park near Swords which is let to a UK hotel group. It draws much of its business from the airport less than 2.5km away.

Premier Inn was originally funded by a Galway-based consortium about nine years ago and is the only hotel with that brand in the Republic. It is let to P.I. Hotels Ltd with a parent company guarantee from the Whitbread Group.

The company operates 650 hotels in the UK. The three-star Dublin hotel is let on a full repairing and insuring 25 year lease from 2005 incorporating upwards only reviews every five years. There are 16 years remaining on the lease.

While yields generally in the Republic have strengthened, the terms available on the Swords hotel looks attractive when compared to the recent sale of the Premier Inn in Belfast for over £9 million (€11.467 million) where the purchaser settled for a yield of 6 per cent.

In addition to the 155 ensuite and air conditioned bedrooms in the Dublin hotel there is a bar, lounge, and restaurant as well as conference facilities to accommodate 75 people.

The 1.7 acre site has 236 car parking spaces along with two coach spaces to provide for “park and fly” facilities.

All but five of the guest bedrooms are on the five upper floors and include a mixture of double and family rooms.

Fingal County Council has granted planning permission for an additional 55 bedrooms but the consent is due to run out next October.

The Premier Inn has like most hotels close to Dublin city benefitted from the pick up in trading over the last two years.

It has also done well out of the increased tourism and business travel through Dublin Airport which handled over 20 million passengers in 2013.

In addition the income was protected by upwards only rent reviews and the current rent of €4,200 per room offered excellent prospects for rental growth over the remaining term of the lease.