Group picks up Blocks 1,2 and 5 Clanwilliam Court, which have 76% occupancy rate 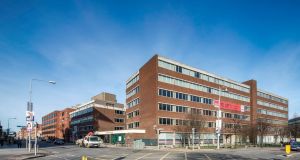 International property investor London + Regional was seeking about €54 million for Blocks 1,2 and 5 Clanwilliam Court, when they went on the market at the end of April.

The buildings, which were constructed in the 1970s, total 93,700 square feet (sq ft) arranged over five to six floors above a double basement with 220 underground car parking spaces.

The buildings occupy a prominent position on the corner of Mount Street Lower and Clanwilliam Place, a short walk from Merrion Square and Grand Canal Dock railway station.

According to Hibernia, the buildings are only partially let with a 76 per cent occupancy rate with tenants that include the ESB, An Bord Bia and Hines Real Estate Ireland. The buildings are currently generating rent of €2.9 million per annum, equivalent to an average of €34 per sq ft, excluding parking.

The weighted average period to break and expiry is five years with all leases due to expire by the end of 2021.

Hibernia said the purchase price equates to a capital value of €544 per sq ft for the office accommodation and a net initial yield of 5 per cent.

“Once fully occupied and post-settlement of an outstanding rent review the contracted rent is expected to rise to over €4 million per annum, equating to a yield on cost in excess of 7.5 per cent,” the group said.