Return of about 7.75 per cent available on four-storey-over-basement building 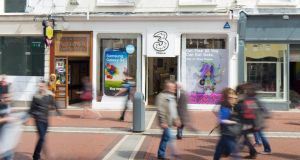 The building at 46 Grafton Street, Dublin 2, is let to Hutchinson 3G Ireland Ltd, trading as 3Mobile, on a 35-year full repairing and insuring lease running for another 12.5 years.

Agent HT Meagher O’Reilly is seeking in excess of €5.5 million for a retail investment at 46 Grafton Street, Dublin 2, that will give a purchaser an income return of around 7.75 per cent.

The four-storey-over-basement building is let to Hutchinson 3G Ireland Ltd, trading as 3Mobile, on a 35-year full repairing and insuring lease that commenced on January 1st, 1991, and has another 12.5 years to run. Though the premises is currently over-rented at €445,000, the rent can be reviewed only on an upwards-only basis for the remainder of the lease.

Moreover, the lease is guaranteed by Hutchinson 3G UK Holdings with an additional bank guarantee equivalent to one year’s annual rent and outgoings payable by the tenant up to a maximum of €550,000.

Furthermore, with more than €5.6 million in income to be collected over the remaining period of the lease, an investor would have a debt-free prime asset by the time the tenant was offered a lease renewal.

There have been a number of notable sales of buildings on Grafton Street in recent years despite the turmoil in the property industry and the fact that about 50 per cent of the buildings on the street are over-rented. Premises with market rents are generally showing yields of 6 to 7 per cent.


Fall in values
Two years ago, Joe Moran of Manor Park Homes – now in receivership – sold the former Wine Jewellers corner shop at number 33 to John Brereton Jewellers for about €5 million. The new owner subsequently spent a considerable sum on refurbishing the building.

The real extent of the fall in values on Grafton Street made headline news last February when the German fund manager GLL Real Estate paid just over €40 million for the adjoining River Island and Wallis stores near the bottom of the street – a whopping 65 per cent fall on the €115 million paid by developer David Daly in 2007.

Currently, CBRE are reporting good interest in two other adjoining – and vacant – shops at the bottom end of the street which are going for sale.

A price of €3.8 million is being sought for the two distressed properties, number 117 and 118, previously occupied by cigar specialist Peterson of Dublin and Thomas Cook.

1 Coronavirus: Construction sector most significant part of new shutdown
2 Wetherspoon’s panto-villain chairman may have the last laugh
3 UK needs to be honest about its Covid-19 strategy
4 Can husband keep savings and half the house in divorce?
5 British exceptionalism backfires in style as Johnson tests positive for coronavirus
6 Volkswagen burning through €2bn in cash per week
7 Remote working doesn’t suit everyone, and it exposes woolly leadership
8 Interim examiner appointed to food distribution companies
9 Rivian takes on Tesla with big batteries and subtler approach
10 Denis O’Brien’s Digicel asks creditors to write off some of its $6.8bn debt
Real news has value SUBSCRIBE