US businessman mentioned in connection with sale of Lough Erne Resort 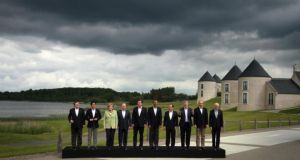 The Lough Erne Resort which hosted the G8 summit last year been on the block since Bank of Scotland placed it under the charge of administrators John Hansen and Stuart Irwin of KPMG in May 2011 on foot of a €33 million secured debt.

A deal to sell the Co Fermanagh hotel that hosted last year’s G8 summit of world economic leaders could be concluded within weeks.

The Lough Erne Resort has been on the block since Bank of Scotland placed it under the charge of administrators John Hansen and Stuart Irwin of KPMG since May 2011 on foot of a €33 million secured debt.

It is understood the administrators are hopeful that they will be able to announce the sale of the five-star, 600-acre property very shortly.

Reports yesterday suggested that a sale to a US businessman with Irish connections has been agreed, although some sources poured cold water on these claims.

The resort on a peninsula jutting into Lough Erne found itself in the spotlight last year when world leaders converged on it for a G8 summit.

Businessman Jim Treacy developed the combined hotel and golf course with the aid of a £26 million (€33 million) loan from Bank of Scotland. The business fell into financial difficulty following the financial crisis, and the lender had its holding company, Castle Hume Leisure, placed in administration in 2011.