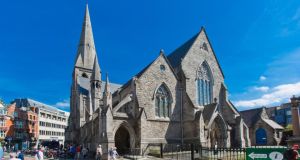 A former Dublin church close to the bottom of Grafton Street is expected to be given a new role when it is let shortly through estate agents Cushman & Wakefield.

The extensive cut-stone building, formerly known as St Andrew’s Church but recently renamed St Andrews on Suffolk Street by owners Fáilte Ireland, is set to appeal to a wide range of businesses because of its key location, heavy footfall and spacious facilities.

The building dates from 1860 and was converted into a tourist office after it ceased to be used as a church in 1993. In spite of its ownership of the premises, Fáilte Ireland moved about two years ago to a remodelled building next door on Suffolk Street.

Ciara Connolly of Cushman & Wakefield says the old church will be available on a long lease at an expected rent of over €600,000 per annum.

Most interest is likely to come from cultural organisations and mainstream retailers as well as restaurant operators, according to Karl Stewart of the letting agency.

The church is the centrepiece of a fast-changing area between Grafton Street and Wicklow Street now dominated by big name fashion outlets. The former Northern Bank premises directly across the road from the church has been converted into a particularly attractive store for H&M and the Bank of Ireland premises fronting on to College Green now functions as a very successful Abercrombie & Fitch outlet.

Even closer to the church, developer Francis Rhatigan is introducing radical changes and a new three level store in the former showrooms of the Department of the Environment at the junction of Trinity Street and St Andrew Street.

The ground floor is an ideal size for a variety of businesses, extending to 818sq m (8,860sq ft).

The lease will also include a former parish hall at the rear of the church with a floor area of 157sq m (1,690sq ft).