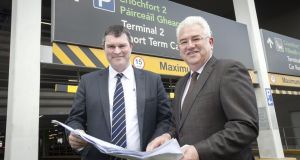 Dublin Airport Authority is spending €14 million on doubling the size of its Terminal Two short-term car park on the back of growing customer demand.

Work has started on the upgrade, which will add four floors and 1,400 spaces to the multi-storey car park.

The airport management company said that the extra spaces are needed to cope with the significant growth in traffic at Dublin Airport over the last three years, and in particular to meet demand for short-term car parking at Terminal Two.

“We are expecting another year of passenger growth in 2015 and this increase in car park capacity means more customers will be able to park conveniently close to Terminal Two,” he said.

Business travellers are the main users of the car park and demand is highest between September and April. As a result building work will be carried out during the summer. Balfour Beatty is the main contractor.

The 1,400 extra spaces will be handed over on a phased basis and work will finish in December.

1 PTSB plays down Ulster Bank talk as it sells €1.4bn of loans
2 Irish tech company Asavie acquired by Nasdaq-listed Akamai
3 Am I crazy to consider switching to an Ulster Bank mortgage?
4 Up or down – how much is your Local Property Tax this year?
5 How much state pension will I get next year?
6 Asian shares slip as surging Covid cases weigh on global economy
7 Brexit to curb services trade with UK, accountants group warns
8 Tesco takes to the skies with home delivery by drone
9 How long can Government afford to keep State pension age at 66?
10 First Derivatives expects Covid-19 to accelerate growth
Real news has value SUBSCRIBE