Temple Bar building expected to fetch as much as €30 million 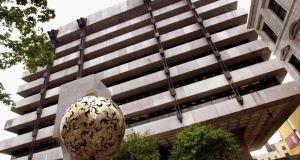 former headquarters on Dame Street on the market next year as it prepares to move into a new €140 million eco-building.

The Dublin 2 building, which opened in 1978, could fetch between €25 million and €30 million, according to property sources.

Along with the sale of two nearby buildings also owned by the bank, this could raise more than €40 million to offset the cost of its new location. The sale will include the plaza in front of the bank.

Estate agent Lisney has been appointed to advise the bank on how to sell the seven-storey building over double basement in Temple Bar and to manage its other leased or owned properties as it moves its staff into the new building in Dublin 1.

The Department of Health, education groups, multinationals and investors are all believed to have considered Dame Street as headquarters.

The Central Bank is understood not to have considered at planning stage building two extra floors on top of its new headquarters, which the building’s frame could support.

The bank has selected a shortlist of six potential contractors to lead its construction. A winning lead contractor will be selected next year with work beginning in the second quarter.

The Central Bank said it was unable to comment on individuals. It has an internal and external team working together on the project.

The bank said it could not comment on the exact cost of its new building which has been questioned by some politicians as it was in procurement.

It said: “We have conducted a full cost analysis and the relocation of all city staff to a new, single location at North Wall Quay is a more cost efficient approach than retaining four separate sites.”