The New York-based York Investment Corporation has bought Tougher Business Park on the outskirts of Naas, Co Kildare, for more than €17 million 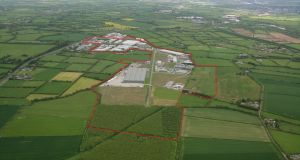 The New York-based York Investment Corporation has outbid two other international funds and an Irish businessman to buy Tougher Business Park on the outskirts of Naas, Co Kildare, for more than €17 million – €3 million more than the guide price.

The sprawling 125-acre business park, sold on the instructions of the National Asset Management Agency and the former Bank of Scotland Ireland, includes 56 buildings dating from the 1990s and early 2000s with an overall floor area of 70,000sq m (753,446sq ft).

York is relatively unknown in the Irish market and is understood to be in the process or acquiring additional commercial properties.

Brendan Smyth of DTZ Sherry FitzGerald, who handled the sale with Savills, said that with four bidders for the entire park and multiple bidders for the various parcels there remained an immediate and unsatisfied appetite for €45-€50 million of industrial stock requiring asset management.

Other high-profile traders in the Naas park include Lidl, Domino’s Pizza, an NCT centre and the Health Service Executive.

A section of the park not included in the sale has a 23,224sq m (250,000sq ft) Primark warehouse and buildings occupied by Nationwide Tiles and a BMW showroom operated by Conlan Motors.

There is scope for York to push the overall rent roll well over the €2 million mark by stepping up asset management procedures, re-gearing some leases and upgrading vacant buildings before putting them on the letting market.

With 16,304sq m (175,492sq ft) of industrial and office space vacant and many building let at just €32 per square metre (€3 per square foot) – 50 per cent less than the going rate in Dublin – there are undoubted opportunities to enlist further logistics companies looking for relatively cheap accommodation within easy reach of the main arterial routes.

With 27 acres of industrially zoned land available, 26 acres of forestry and 24 acres of unzoned land, York will have a range of options open to them, including the one to sell off plots to companies prepared to build their own premises.

The sale also includes Smith’s farmhouse and adjoining park which extends to 48 acres, some of it with excellent road frontage.