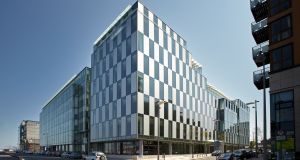 Blackstone, the world’s biggest private equity firm, is on track to make a profit of €43 million on two office buildings it bought in Dublin’s south docklands only two years ago.

The company has agreed sale terms at €123 million for the Bloodstone Building and an adjoining block on Britain Quay – 54 per cent more than the €80 million paid for them towards the end of 2013.

The purchaser will be Real Is, a Munich-based property adviser, which handles property investments for a range of German pension funds. Last June Real Is also paid €59 million for Beaux Lane House, a substantial office block owned by the Royal College of Surgeons at the rear of St Stephen’s Green shopping centre.

Blackstone has been an active investor in Ireland since the economic crisis and the collapse of the property market and was reported to have made an estimated €375 million profit selling part of its Eircom stake to hedge fund Anchorage Capital last year.

Duncan Lyster of Lisney, who is handling the sale of the two docklands buildings, said yesterday he had “no comment”. There was also no comment from Johnny Horgan of CBRE who is advising Real Is.

The two buildings were completed by property developer Seán Dunne shortly before the property crash in 2008. Nama created something of a surprise by offering them for sale while they were largely vacant though likely to attract tenants because of their superb location and high-quality finish.

Bloodstone Building, an eight-storey block overlooking the Liffey, is producing rents of about €2.14 million. The block has a floor area of 7,720sq m (83,100sq ft) and is about 84 per cent occupied. As many of the original lettings were at bargain rents of €23-€30 per sq ft, a new owner will be in a position to substantially increase the rent roll once the five-year reviews fall due. A recent letting was completed at €49.50 per sq ft. The tenants include SEB Life, TripAdvisor, Long Meln and AWAS Aviation.

The original sale to Blackstone also included Hume House on Pembroke Road in Ballsbridge which had been bought by Mr Dunne in 2005 with the intention of redeveloping it.

Blackstone paid in the region of €100 million for the three buildings and is expected to offload Hume House in the coming months. The company upgraded Bloodstone and the adjoining block after buying them and also improved the reception areas.

A property expert said the market should not be surprised by Blackstone’s decision to sell on the two office blocks at a handsome profit.

“Any market experiencing the same trauma as the Irish property sector will always attract opportunity funds first and long term core funds later on once things settle down. Dublin is no different.”

Early in 2013, King Street Capital bought the Bishop’s Square office building on Kevin Street for €65 million and last January it sold it on to Hines, the international property company, for €92.5 million – a price rise of more than 42 per cent.

The €40 million-plus profit about to be made by Blackstone in Dublin will be well short of many of its property gains on both sides of the Atlantic.

Two years ago the company was reported to have made a profit of almost £1.6 billion in just four years on a major office investment at Broadgate in London.

1 My aunt never told us that Gran passed away with no will
2 Ryanair to slash 1,000 flights from August and September schedules
3 Political row brewing if Ireland loses its appeal on Apple
4 Netflix stock drops after downgrade by UBS analysts
5 The $6bn judgment pitting Nigeria against Irish businessmen
6 Will Revenue come calling with tax bill if inheritance tax threshold falls?
7 Green Party TD queries ‘usefulness’ of another appeal in €13bn Apple tax case
8 Delta Air Lines scales back flights it planned to add in August
9 If it’s safe to do so, could this be the time to spend for Ireland?
10 Davy raises mortgage lending forecast as home listings rise
Real news has value SUBSCRIBE