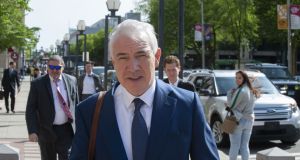 Bankrupt developer Sean Dunne, once one of Ireland’s richest men, says he has paid a nearly $10,000 sanction imposed on him by a US court, according to a court filing. Photograph: Douglas Healey

After pleading poverty for months, bankrupt developer Sean Dunne, once one of Ireland’s richest men, says he has paid a nearly $10,000 sanction imposed on him by a US court, according to a court filing.

Mr Dunne’s payment would appear to clear the way for US district judge Jeffrey Meyer to consider his appeal of the verdict in his and his ex-wife Gayle Killilea’s US civil trial last year.

In late November, the judge questioned Mr Dunne’s claim that he was too poor to pay the sanction and indicated he would delay ruling on his lawyer’s motion for a new trial until Mr Dunne had paid the money.

In a sworn affidavit, dated December 31st and filed at US district court in New Haven, Connecticut, Mr Dunne said he had provided a cheque for $9,330 to the trustee of his bankruptcy, attorney Richard Coan, to cover the sanction. The money reimburses Mr Coan’s law firm for legal costs related to Mr Dunne’s failure to preserve and provide some emails related to his civil trial.

Mr Coan sued Mr Dunne and Ms Killilea, accusing them of concocting a scheme to shield millions of euro of assets from Mr Dunne’s creditors by giving them to Ms Killilea.

After three weeks of testimony, a US jury found Mr Dunne had fraudulently conveyed assets to Ms Killilea and ordered her to surrender €18.1 million to the trustee, whose job is to distribute any remaining moneys to creditors.

Since then, the two sides have engaged in legal manoeuvring while also holding occasional settlement talks.

Last autumn, Mr Dunne filed an affidavit saying he had an income of just €200 a month and could not afford to pay the $9,330 sanction he had agreed to pay before the trial began. He also hired a new lawyer, Luke McGrath, who asked the court to throw out the verdict and order a new trial.

The judge cited Mr Dunne’s hiring of Mr McGrath as a reason for his scepticism about Mr Dunne’s claim that he was broke and could not pay the sanction.

“Especially in light of his retention of new counsel, the court is not persuaded by Dunne’s contention that he lacks the resources to satisfy the modest amount of attorney’s fees [$9,330] resulting from the sanctions order,” the judge wrote in his ruling.