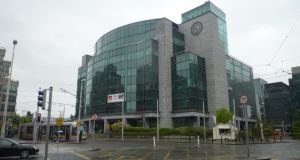 
One of the three original office blocks at the front of Dublin’s International Financial Services Centre has been sold in an off-market deal for €35 million. Eleven years ago, the same building, La Touche House, was bought by a group of 62 Irish investors for €82.5 million.

The 57 per cent slide in the value of the six-storey-over- basement building is another reminder of how deeply commercial property values have fallen, particularly older multi-let offices where leases are due to start running out over the next few years.

Credit Suisse has acquired La Touche House on behalf of a Swiss-based fund which is convinced that the building will continue to attract international tenants because of its high quality fit-out and prime location at the front of the IFSC. The block is currently producing a rent roll of €4.3 million, giving the new owners an initial return of no less than 12 per cent.


Capital allowances
Jonathan Hillyer of agents HWBC and Joe Stanley of Eversheds solicitors advised Credit Suisse on the purchase. The deal is the latest in a number of similar off-market transactions completed by HWBC in recent months.

The 12 per cent return will be a significant improvement on the original yield of 6.1 per cent earned by a syndicate assembled by Warren Private early in 2002 when it bought the 9,615sq m (103,500sq ft) block and 62 car parking spaces from the Bank of Ireland for €82.5 million.

The real attraction of the deal at the time was that it allowed the investors to avail of €48 million in unclaimed capital allowances by offsetting Irish rental income against that figure. That arrangement initially brought the overall return to investors up to 6.9 per cent.


High standard
The 62 members of the syndicate, most of them business and professional people, invested €24.75 million in unit sizes of €317,000. A small number signed up for two or three units each. The balance of the funding was provided by the then Anglo Irish Bank on a non-recourse basis. At the time the deal was easily the largest property syndication in Ireland.

The strong price paid for La Touche House in 2002 – it was previously bought by the Bank of Ireland in shell and core condition in 1993 for a reported €38 million – was prompted not only by the tax breaks but also the fact that the building, and another block beside it bought for AIB Captial Markets, were then acknowledged as among the best office developments in the city, largely because of their highly expensive fit-outs which were intended to set the tone for the newly-launched IFSC.

La Touche House now has 13 different financial services tenants with an average of three years remaining on the various leases. Even if some of the tenants decide to move out when their leases expire, the new owners are obviously convinced that replacement tenants will be easily found because of the high standard of the offices and the convenient location.