Warning! there may be fish bladder in your Guinness 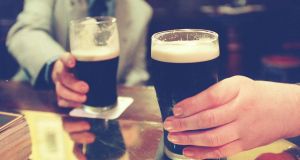 To cater for vegan sensibilities, Guinness plans new filtration process which ditches use of isinglass.

Who ever thought a pint a Guinness might contain fish bladder. For 256 years, the creamy dark stout has been marketed as a natural blend of barley, hops, yeast and water.

Devotees will be surprised to learn, however, the brewing process also involves isinglass, a gelatin obtained from fish bladders.

It’s used to filter yeast particles during the brewing process. As a result, traces of fish bladder often end up in your pint.

To make the stout more acceptable to vegetarian and vegan drinkers, Guinness has been searching for an animal-free method of filtration - one which maintains the quality of its brew.

Now it seems to have hit upon a viable alternative. Without specifying what the process involves, the company has announced plans for a new vegan-friendly filtration system at its St James’s Gate brewery in Dublin.

The annoucement comes in the wake of a longstanding campaign by vegans and two online petitions .

According to Guinness-owner Diageo, the new system will be up and running by late 2016, with the revamped brew in pubs and off-licences soon after.

A spokesman said the product would taste the same but would be vegan-friendly. “Isinglass has been used widely as a means filtration in the brewing industry for decades,” he told The Irish Times.

“However, because of its use we do not label Guinness as suitable for vegetarians, and have been looking for an alternative solution for some time.”

“We are now pleased to have identified a new process and are re-investing in a new, state-of-art filtration system at St James’s Gate, which once in place will remove isinglass from the filtration process,” he said.

1 How can I view my dead brother’s will if I’m not the executor?
2 Google users in UK to lose EU data protection, sources say
3 Just 8,000 houses built last year offered for sale on open market, says CIF
4 UK ‘not listening’ to North’s businesses on immigration policies
5 Politics more hazardous to economy than Brexit or coronavirus
6 Store manager unfairly dismissed for hugging staff members awarded €15,000
7 Coronavirus test fast-tracked by Dublin company Hibergene
8 Appeals board green lights Bartra’s Rathmines ‘co-living’ plan
9 How to . . . move (almost) everything to your new phone
10 Brexit is a culture war with economics as collateral damage
Real news has value SUBSCRIBE