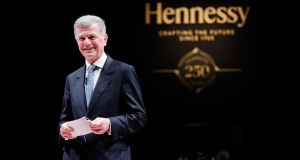 It is 250 years since Richard Hennessy, from Co Cork, founded the world-famous cognac house that still bears his name.

Hennessy has survived all the tumults of French history: the revolution, the Napoleonic wars, the Franco-Prussian wars and two World Wars to retain its position as the world’s most successful cognac.

Cognac, the most famous form of brandy, is only made in the south-central departments of Charente and Charente-Maritime. The industry is built around the town of Cognac, which remains at the centre of everything associated with it.

The grapes used in cognac come from an area of about 50sq km around the town of the same name. Of the 6,000 winegrowers in the region, a third are contracted to Hennessy.

Cognac is produced by the double distillation of a type of white wine that is undrinkable in its original form but distils beautifully. It is aged in Limousin oak barrels that give it its distinctive ruby or cherrywood colour.

The Hennessy distillery is still there on the banks of the river Charente in Cognac. The company employs 800 people.

Hennessy is a company that has built on the tradition of two families. One is the Hennessy family; the other is the Fillioux family, which has produced generations of master blenders to Hennessy since 1800.

Similarly, Hennessy has a strong ancestral attachment to Ireland. Richard Hennessy was the son of Lord Ballymacmoy. Born in 1724, Hennessy found his opportunities limited during the years of the penal laws, as did most of those from the country’s Catholic gentry at the time.

Hennessy joined the French army, which inflicted a famous defeat on the British-led coalition at the battle of Fontenoy in 1745 during the wars of the Austrian succession.

He sought opportunities elsewhere in France and settled in the Cognac region, where the Irish expertise in whiskey distilling could be transferred to the process of distilling wine to make brandy.

Hennessy remains the best-known of the Wild Geese who left Ireland in the late 17th century and 18th century though the ancestor of another, Marshall McMahon, became president of the French republic in the 1870s.

Though Richard founded Hennessy, it was his son James who established the company we know today. By 1800, Hennessy had already begun exporting to the United States, a country which, like France, was a new republic. A global brand was being established.

Kilian Hennessy, the great-great-grandson of the founder, died in 2010 at the age of 103, having provided a link to two centuries of the Hennessy family.

In February, Hennessy flew a group of 55 of its growers to Ireland to re-establish the link with the old country and visit Ballymacmoy.

Hennessy president and chief executive Bernard Peillon jokes that the association with Ireland is not like the ancestral attachment that millions of Americans erroneously feel to the Mayflower.

Instead, it is part of the “DNA identity” of the company. Remarkably, the family connection remains with Maurice-Richard Hennessy, the eighth generation of Hennessys. He has been involved in the firm for 40 years and has his own vineyard. The latest Hennessy “looks more Irish than French”, Mr Peillon says.

“The first thing you are told about our roots is that Hennessy is a very Irish company. I have an office portrait of Richard Hennessy. Every time I raise my eyes, I have him looking over me.”

Mr Peillon is a 35-year veteran of the drinks industry. A father of six children, he still runs marathons worldwide – rising early to pound the streets in order to clear his mind for the day ahead.

“I love the idea of running everywhere on the planet,” he says.

“I need to put my mind and my body into a discipline, because Hennessy requires a sound mind and healthy body. Hennessy is a marathon. You need to be on top of everything to do it.”

In 1971 the Hennessy Group merged with Moët & Chandon, another one of France’s world-recognised alcohol brands and in 1987 with Louis Vuitton.

Hennessy is in 120 countries. It is the most global of spirits and the third biggest premium spirit in the world after Smirnoff and Johnnie Walker.

It is a major market leader in markets as diverse as the US, China and Nigeria. The company, as he points out, is “99 per cent international”.

In recent years there has been a decline in cognac sales in China, where customers prefer the premium brands. This has been offset by double- digit growth in the US – the world’s largest cognac market.

He concedes that cognac has a reputation for being rather an elite drink to be drunk in gentlemen’s clubs out of balloon- shaped glasses, but says this is a perception particular to western Europe.

In the US and China, cognac is primarily the basis of cocktails drank by young people. Skilful marketing has also positioned it as a drink associated with rappers – however incongruous that might seem to a European audience.

Mr Peillon emphasises the “art of mixing” in order to position Hennessy as a drink attractive to younger consumers while still retaining an accessible exclusivity.

Hennessy’s latest creation is its Hennessy 250, a special blend of eaux de vie aged for at least 15 years. It retails for €450 in Ireland.

“One of the ideas behind Hennessy 250 is the idea of transmission,” Mr Peillon says. “If you listen to Yann he will say that he is working with the eaux de vie that his ancestors have put aside. For 50 years he has prepared the future. He says he will be judged by his successors.”

Mr Fillioux was asked to look at a blend that typified his 50 years as master blender at Hennessy and those eaux de vie that made him most proud. We gave him a “blank cheque to create an incredible blend”, says Mr Peillon.

There are other celebrated Hennessy products – one of which is the much-prized Hennessy Paradis, a blend of 25-year-old to 150-year-old eaux de vie.

Keeping up with demand and anticipating future trends is fraught with difficulty in the spirits industry. Fifteen years ago, cognac farmers were complaining of oversupply. Now there is talk of extra acreage being planted to keep up with demand. Does he have enough stock to cope?

“The answer is no, because we are successful. The Hennessy business model is well spread. The ability to predict the future becomes more and more difficult as you go further into time,” he says.

Conspicuous in its absence from the Moët Hennessy portfolio is an Irish whiskey – the world’s fastest-growing spirit brand. Has he ever considered it?

“More than once,” he says, smiling. “It is always a matter of opportunity. There’s no rush but clearly it is on the map.

“This is a good time for Irish whiskey. There is a renaissance first of the brown spirits after a cycle of white spirits. People now want more authenticity, more craftsmanship and more taste characteristics. Irish whiskey is part of that boom period.”

Cognac is a spirit more recognised in other countries than at home of France. For historic reasons, France has never been a huge market for cognac.

For Mr Peillon, like many other French businessmen whose main markets are abroad, the strengths and weaknesses of French business culture are put into sharp relief.

He says the present generation of French people are more entrepreneurial than previous generations, but are still stymied by a system which is suspicious of capitalism.

“My children are far more agile. They are children of the world. One of my daughters has started a fashion brand on her own. There is a lot of appetite for entrepreneurship in France, but France is not doing that currently.

“Our labour laws are too rigid. All of us respect the strong values of ensuring that we are not just selfish, that we participate in the efforts through our social security system. People have the strong values to be conscious of other.

“At the same time we need to have a system that is simpler, more agile and allows entrepreneurship to emerge with labour laws that are more flexible.”