Monsanto in talks with Bayer about ‘strategic options’ 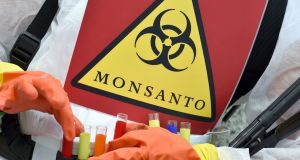 Monsanto is in talks with Bayer AG and other companies regarding “alternative strategic options,” a month after it rejected the German company’s $62 billion takeover offer, the US seed producer said on Wednesday.

Monsanto’s options include combinations with other companies and businesses in the sector beyond Bayer. Potential deals could involve BASF and any businesses divested from the Dow/DuPont merger, according to analysts.

Monsanto, which also reported lower-than-expected sales for the sixth straight quarter on Wednesday, had approached Bayer about a potential acquisition of its crop science unit, Reuters reported in March.

“Monsanto remains the partner of choice in this industry and I assure you that we will continue to actively explore these opportunities,” chief executive Hugh Grant said.

Monsanto said there was “no formal update on the Bayer proposal,” but that talks have been ongoing for the past several weeks.

A Bayer spokesman said the company had no comment.

The seeds and agrochemicals industry, long dominated by six large companies, has been jolted by several large deals in the past year as low crop prices and belt-tightening by farmers pressured earnings. Syngenta agreed in February to be acquired by ChemChina for $43 billion, while Dow Chemical and DuPont struck a $130 billion megamerger last year.

Companies have also explored selling assets that may be underperforming or non-core to their businesses going forward.

Monsanto had not opened its books more than two weeks after rejecting Bayer’s offer but left the door open to a possible deal, Reuters reported this month, citing sources.

Bayer, however, has no plans to raise its offer without reviewing Monsanto’s confidential information, the sources said.

Bayer had planned to issue about $15.4 billion in new shares to help fund the proposed all-cash deal.

Monsanto’s weak earnings could increase the possibility of M&A for the company, according to Bernstein analyst Jonas Oxgaard.

Still if Monsanto’s stock price fails to rally strongly, that could give Bayer some cover if it decided to back out of the deal, he said.

Bayer’s offer, which was opposed by some of its own shareholders, puts the deal at $122 per share.

Monsanto shares rose 0.7 per cent to $101.79 on Wednesday, well below a high above $112 shortly after the Bayer offer was announced.

Bernstein Research estimated that Bayer can issue no more than 290 million shares before a shareholder vote is needed. That could raise almost €26 billion ($29 billion) based on Bayer’s share price on Wednesday.

Separately, Monsanto reported that net income tumbled more than 37 per cent to $717 million, or $1.63 per share, in the third quarter ended May 31st.

A global glut of generic glyphosate, the active ingredient in Monsanto’s Roundup herbicide, and delays in securing European Union import approval for Monsanto’s next-generation biotech soybeans dragged down profits in the quarter, the company said.

Earnings per share totaled $2.17 from continuing operations, well below the average analyst estimate of $2.40, according to Thomson Reuters I/B/E/S. Net sales declined 8.5 per cent to $4.19 billion, missing estimates of $4.49 billion.