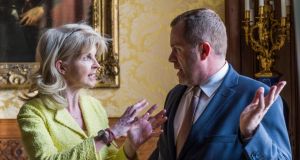 Irish research and development firm Life Scientific is to double its workforce after a deal with French co-op Invivo was officially signed.

Life Scientific said it would create around 20 jobs over the next five years, mainly in research and development. The company specialises in off-patent crop protection products.

Under the deal, which was announced last year, Invivo will acquire a 50 per cent stake in the NoveUCD-based company. The value of the deal was undisclosed.

InVivo, which includes 223 farming co-operatives and employs around 8,800 people in 28 countries, formally signed the agreement at an event at the Irish Embassy in Paris this week. The co-op, which has a membership of more than 300,000 farmers, works to develop sustainable and profitable solutions to secure farmers’ production and revenue.

Founded in 1995 by Nicola Mitchell, Life Scientific is headquartered in NovaUCD and has an annual turnover of over €10 million.

1 Money matters: ‘My father embarrassed us with his haggling’
2 Comcast acquires Irish cloud-based telco Blueface
3 Opioid executive admits to ‘no morals’ ahead of prison term
4 Pilita Clark: When a rude boss keeps you waiting, why not walk out?
5 Henderson Park seek €400m+ for prime Dubin office blocks
6 Are there annual limits on inheritances or gifts to a child?
7 NI house builder apologises to Harry and Meghan over adverts
8 Lack of trust blocks solutions to personal insolvency - ISI chief
9 Nestlé buys Allergan business to expand in medical nutrition
10 Irish technology company TEKenable to create 60 jobs
Real news has value SUBSCRIBE