‘This is a wake-up call for Chinese consumers, who have long believed that foreign fast-food brands follow higher standards than domestic ones’ 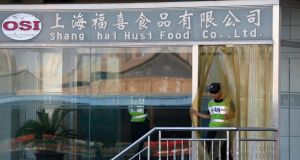 The Husi Food factory in Shanghai, which is under investigation by the authorities. Photograph: Aly Song/Reuters

Here at Asia Briefing we often discuss how China’s desire for high standards in food safety presents opportunities for Irish companies; the country’s latest food scandal is another reminder of just how true that is.

Back in May, Ireland’s dairy sector had cause to celebrate when it was one of the few countries to pass an audit by the Chinese authorities, as Irish plants were found to meet fully the standards of China’s new food safety laws.

It is an area full of opportunity, but also one fraught with pitfalls.

The scandal highlights just how important rigorous testing is when supplying food to China, which has been rattled by numerous food safety scandals over the years, from tainted infant formula to fake ingredients.

The investigation took place after Shanghai-based Dragon TV ran a report claiming that Shanghai Husi had supplied products tainted with reprocessed expired meat to a string of fast food chains and restaurants across China, including McDonald’s, KFC, Pizza Hut, Burger King, 7-Eleven and the Taiwanese-owned Dicos.

The company produced 5,108 crates of meat products, including McNuggets, pork patties and beef steaks using expired or mouldy materials, according to the bureau and Shanghai’s Food and Drug Administration, which are jointly investigating the case.

About 100 tonnes of the Husi products have been sealed up, according to Xu Wei, a spokesman for the Shanghai municipal government.

OSI has said it was “appalled” and was investigating the matter, while McDonald’s issued a statement, saying it had stopped using all food materials supplied by Husi. Yum, the parent company for KFC and Pizza Hut, said its restaurants had stopped using meat from the firm.

McDonald’s and Yum say they will resume purchases when they can ensure the food complies with laws and standards. There are fears that foreign firms are sometimes targeted by Chinese media to help give domestic producers a lift, and some local media have indeed pointed to the opportunity for domestic fast food chains to raise their game at a time when confidence in overseas brands has been shaken.

In August, New Zealand’s Fonterra said it had found a potentially fatal bacterium in one of its products, triggering recalls of infant milk formula and sports drinks in several markets, including China. Tests later found the initial finding was incorrect. In December 2012, state-run CCTV reported that chickens used by KFC were fed chemicals and 18 types of antibiotics to make them grow faster.

Zhao Ping, deputy director of the Chinese Academy of International Trade and Economic Co-operation, which is under the ministry of commerce, told Xinhua that the companies’ rapid expansion was not accompanied by a similar improvement in managerial capacity and training, resulting in continued food safety scandals.

“Multinationals should require their operations in China to follow the same standards in terms of food safety as in developed markets,” Ms Zhao said.

The scandal was “a wake-up call for Chinese consumers, who have long believed that foreign fast-food brands follow higher standards than domestic ones”, she added. Fast-food restaurants were also responsible for unsafe food purchased at their outlets, because they should have supply chain controls at their logistics centres that dealt with this issue before products were shipped to the stores.