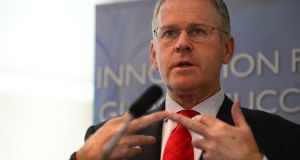 Stan McCarthy, chief executive at Kerry Group: has played down the prospect of a sale of the consumer foods division, which has been the subject of perennial speculation. Photograph: Dara Mac Donaill

A sale of the consumer business, with brands ranging from Dairygold butter spreads to Denny rashers and sausages and which had a trading margin of 8.3 per cent in the first half of the year, would help accelerate deals in the remaining business, Exane said in a note on Tuesday.

The company’s taste and nutrition business’s €303.8 million first-half trading profit was more than five times that of consumer foods, while its margin was 50 per cent wider, at 12.8 per cent.

Kerry Group, currently valued at €10.9 billion on the Dublin bourse, has spent an average of about 4 per cent of its market capitalisation a year on mergers and acquisitions since 2010 and M&A is likely to play a bigger role in its strategy over the next five years, the French brokerage said.

However, Kerry Group, led by chief executive Stan McCarthy, has played down the prospect of a sale of the consumer foods division, which has been the subject of perennial speculation.

“Kerry Group’s dual-strategy approach has served the organisation and its shareholders well,” said a spokesman for the company, referring to its two divisions. “Both businesses continue to grow in volumes and margins.”

He added the fact the consumer foods division is “highly cash-generative”, which has aided the group’s strategy.

Exane reiterated its “outperform” rating on Kerry Group’s stock, which has fallen by about 26 per cent from an all-time high of €84.05 reached in April.

Kerry Group said in a trading update earlier this month that growth in its earnings per share this year is expected to be towards the lower to middle of the 6-10 per cent range it had previously forecast.

1 Over 400 complaints from migrant workers at meat plants lodged with WRC
2 Avoca warns of redundancies due to coronavirus
3 Staff at Dublin and Cork airports to vote on work practice changes
4 McGann stepping down at troubled Aryzta
5 The Irish Times Deal of the Year: The three finalists
6 Coronavirus spreads to sandwich king
7 Ufurnish: ‘It’s like Skyscanner, but for furniture’
8 Virgin Media vows to withhold sports channels until Eir ‘pays its bill’
9 The seven winners of Irish Times business awards from November 2019 to May
10 Companies without tax clearance shut out of Covid wage subsidy
Real news has value SUBSCRIBE