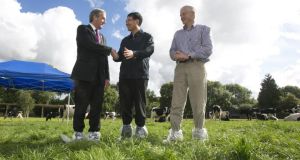 Ireland is now the second-largest exporter of infant formula to China, jumping ahead of New Zealand for first time this year.

According to figures from Bord Bia, based on Chinese customs data, Irish exports of retail-ready infant formula to China amounted to 13,100 tonnes in the first half of this year. This equated to about 17 per cent of Beijing’s import market for finished formula.

The Netherlands, the largest exporter of infant formula to China, accounts for about 34 per cent of the market.

Huge swaths of the population decided the only safe food for babies was foreign formula – the domestic market still has not recovered from the scandal.

David Owens from Bord Bia’s dairy sector said the agency was focused on building the image of Ireland as a premium supplier of infant formula and other dairy products.

“Our credentials around food safety, combined with our outdoor production systems, give us that premium image in the market, and we’re trying to build on that.”

China ranks as Ireland’s second-largest dairy export market, valued at €404 million in 2014. Irish dairy exports to China for the first half of this year grew by almost 25 per cent. If that trend were to continue for the remainder of 2015, the value of our Chinese dairy exports would reach €500 million, Bord Bia said.

While dairy prices have flatlined in the past year, global demand is still forecast to outstrip supply by 25 billion litres by 2020 – a trade gap that exporting countries such as Ireland will be keen to exploit.