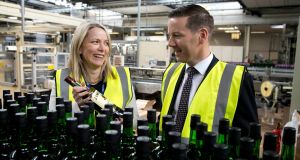 The payment was made through an Irish-registered company called Comrie Ltd, which owns 92.89 per cent of IDG. A dividend of €78.8 million was made by the company in 2014.

These payments are thought to reflect the highly profitable nature of IDG, which is a private unlimited company and does not publish any financial information about its activities here.

Comrie’s latest accounts show it recorded a profit of €130.8 million in the year to June 2015, up from €74.9 million in the previous 12 months. “The directors intend to develop the existing activities of the group,” the accounts state.

The company, which has no employees and is resident in France for tax purposes, received income of €131.7 million from its subsidiaries – Irish Distillers Group and Irish Distillers Ltd. It also earned €9,000 in interest on loans to group companies.

Its liability for French corporation tax would have been €43.9 million, based on a tax rate of 33.3 per cent but it actually paid just €932,000 due to losses carried forward and the effects of non-taxable income.

In the year to the end of June 2015, 5.1 million cases of Jameson were sold around the world, a rise of 9 per cent on the previous year. It is the biggest Irish whiskey brand in the world.

Irish Distillers declined to comment on the accounts, saying it was a matter for the group.