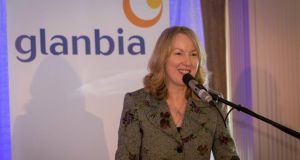 Glanbia group managing director Siobhan Talbot said that the company “performed well” in the year with revenues growing by 8.8 per cent.

Food group Glanbia has reported results ahead of expectations this morning with 2013 revenues rising to €3.3 billion on the back of strong volume growth in its global performance nutrition division.

Total group revenue grew 8 per cent in the year, with earnings before interest, taxes and amortisation (EBITA) up 5.6 per cent to €226.7 million.

Siobhan Talbot, group managing director said that the group had “performed well” in the year, particularly global performance nutrition where strong momentum in branded revenue growth and international expansion delivered a 28 per cent increase in profitability.

“Glanbia had another year of double digit earnings growth in 2013 as the group delivered a 12 per cent increase in adjusted earnings per share. We expect 2014 to be another positive year for the group.”

Revenues in the global performance nutrition division increased 11.8 per cent to €655.3 million driven almost entirely by volume growth as prices were largely unchanged in the period.

Global ingredients also delivered a good performance, with revenues increasing by 11.5 per cent to €1.07 billion.

Dairy Ireland was more challenging however, as underperformance in consumer products outweighed a solid performance in Agribusiness.

The company is guiding 8 per cent to 10 per cent growth in adjusted earnings per share for the full year 2014, on a constant currency basis.

“Our ambition is to continue to deliver a similar annual organic growth rate through to 2018, while seeking to sustain a return on capital employed in excess of 12 per cent,” Ms Talbot said.

1 Wet pub openings fuelled big rise in Irish Covid infection rates
2 Basic income for all: Has the Covid crisis given us a new economic model?
3 Chris Johns: Economies may enjoy ‘roaring twenties’ if ministers learn lessons
4 Only way is up for Stripe as valuation skyrockets
5 How long can Government afford to keep State pension age at 66?
6 Direct sea routes to Europe offer certainty in choppy Brexit waters
7 ‘I don’t need to do any of this. . .I don’t actually need to work.’
8 Pandemic brings a halt to Zara-owner’s Irish expansion
9 White knights or loan book cannibals – what will happen at Ulster Bank?
10 How a Meath couple landed a €266m jackpot with their business idea
Real news has value SUBSCRIBE