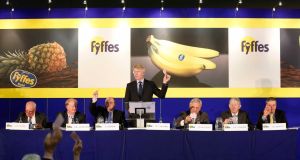 Tropical fruit distributor Fyffes launched a share sale on Thursday, likely to raise about €45 million, as it seeks to bolster its financial firepower for more deals after buying two Canadian mushroom companies in the past six months.

The company, led by chairman David McCann, announced after the stock market closed in Dublin that it has hired Davy to sell 30 million shares.

Based on the latest share price, this would raise more than €47 million. However, such placings typically take place at a discount of about 5 per cent to the prevailing market price.

Fyffes, which entered the mushroom market in April with the €99 million purchase of Canadian mushroom company Highline Produce, expanded its presence last week with the purchase of a rival mushroom business, All Seasons, in the same market, for €41 million.

“Following the company’s move into the North American mushroom category through the recent accretive acquisitions of Highline and All Seasons, the net proceeds of the placing will maintain the balance sheet strength and liquidity of the company and provide funds for further acquisitions as part of Fyffes’ strategic objective to grow its business by pursuing attractive acquisition opportunities across each of its four existing and other new product categories,” Fyffes said in a statement.