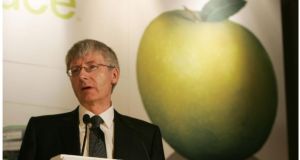 Carl McCann, chairman of Total Produce. The group said it had completed the acquisition of a 50 per cent shareholding in the Canadian fresh produce company Gambles. (Photograph: Alan Betson/The Irish Times)

Fruit and vegetable distributor Total Produce has increased its full-year adjusted earnings per share half into the upper half of the previously announced range of between 9.20 cent to 10.20 cent.

In an interim management statement issued on Wednesday ahead of its annual general meeting in Dublin, the group said trading for the first four monnths of the year had been “satisfactory”.

“Total Produce is in a strong financial position and continues to pursue attractive acquisition opportunities to further expand the group,” it said.

The group also said it plans to purchase Total Produce shares in the market as appropriate, subject to receiving shareholder approval at the agm.

As previously announced, Total Produce is to issue pay a final dividend of 1.763 cent per share on Friday, a 6 per cent increase on last year.

Total Produce said it has completed the acquisition of a 50 per cent shareholding in the Canadian fresh produce company Gambles, the group’s fourth North American acquistion since 2013.

Details of the investment were made in February.

Gambles, which was founded in 1989 and employs over 280 staff, offers a wide range of fresh, local and imported produce that is delivered daily throughout Ontario to the retail, wholesale & food-services sectors. In 2014 it reported sales of CAD$170m (€118m) .