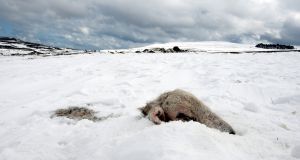 A dead sheep buried in snow drifts above the Glens of Antrim. Photograph: Paul Faith/PA Wire

Farmers across Ireland are counting the cost of “10 months of dreadful weather” as they struggle with a lack of food and loss of livestock. The constant bad weather and snow in recent weeks is causing concern among farmers as they worry about potential financial consequences.

The Irish Farmers association has called for an urgent co- ordinated response to overcome unprecedented problems with fodder shortages and a lack of cashflow on farms.

IFA deputy president Eddie Downey, who heads up the IFA project team on fodder, said the bad weather was costing farmers as they had to take their cattle indoors and buy feed. The problems for farmers were further compounded by a bad summer and winter last year, followed by a bad spring this year.

“The tillage farmers have no groundwork done,” Mr Downey added. “This is the time of year they’re usually ploughing, getting fields ready, sowing grain and crops. It hasn’t happened this year because of the weather.”


Emotional impact
Farmers in Northern Ireland are facing financial difficulty after several thousand animals died in snow storms. Last week helicopters had to be used to deliver animal feed to thousands of snowbound livestock stranded as a result of the severe weather.

The extent of the losses is unclear but the Ulster Farmers Union predicts the monetary loss to the agricultural sector could rise to £3 million.

Mr Downey said the death of livestock had a financial and an emotional impact on farmers. “There’s enough for farmers to worry about financially, but after putting the hours, money and hard work and then seeing your animals die, it’s devastating.”

Mr Downey said the current weather had come at a bad time for farmers as it was the height of the lambing and calving season.

“There was not enough good weather to make silage last year and the quality of the silage may not have been as good as expected. We have a late spring this year so that has further compounded problems for farmers.”

He urged farmers to get in contact with their local Teagasc office to get advice and help. He also urged farmers who may have surplus feed to help other farmers.

“The farming community are generally great for helping each other out. If your neighbour is stuck for feed then you should help them out because it could happen to you later on.

“The main thing is that if someone has extra feed that it’s not lying there rotting when it could be used to help another farmer.”

Mr Downey urged banks to give farmers some leeway while they tried to deal with the bad weather.

“Commodity prices for beef and lamb along with milk quotas are a good price at the moment. From the point of view of co-ops and banks, they should give farmers a bit of a break to get them across the line and support agri-business and because farmers are good at paying back their debts .”