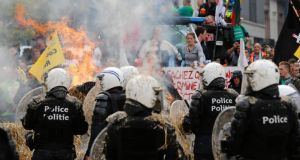 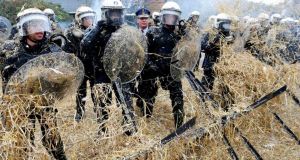 Belgian riot police officers are covered by hay thrown by demonstrators as farmers from all over Europe take part in a demonstration an emergency meeting at the EU Council headquarters in Brussels. Photograph: Yves Herman/Reuters 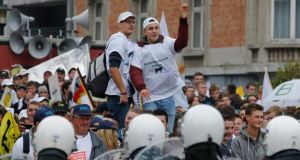 Thousands of farmers, many with their tractors, were gathering on the occasion of an European agriculture ministers council meeting to vent their anger over economic problems in the agriculture sector. Photograph: Olivier Hoslet/ EPA 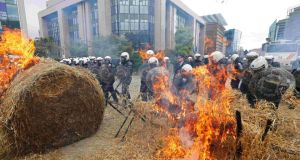 An estimated 6,000 farmers, including members of the Irish Farmers’ Association and Irish Creamery Milk Suppliers’ Association, brought central Brussels to a standstill on Monday as more than 2,000 tractors parked in the roads leading up to the Schumann roundabout in front of the European Council headquarters.

As EU agriculture ministers gathered for an emergency meeting to discuss falling product prices, bonfires were lit outside while police assembled from early morning. Much of central Brussels was shut to traffic, with police helicopters circling the area around the European Council and smoke filling the skies for much of the day.

European Commission vice-president Jyrki Katainen, who represented Agriculture Commissioner Phil Hogan who was unable to attend the meeting due to illness, described the package as a “robust and decisive response” to the price drop that has beset the dairy industry in particular.

The €500 million fund is being taken from fines or “super-levies” imposed on farmers for over-quota production, and will be used to boost income. More than €400 million is expected to be targeted at the dairy sector, distributed through “national envelopes” for each country. A “distribution key” calculating the percentage to be allocated to each country is still being worked out.

In addition, 70 per cent of direct payments will be received by farmers next month instead of in December.

Speaking after the Council meeting, Jyrki Katainen described the package as a “mix of immediate and long term measures” which will help tackle cash-flow difficulties and the functioning of the supply chain.

“Today’s proposal is a significant fast and concrete response to the current situation. Five hundred million euro is real money. It will help farmers to produce food in a sustainable way.”

But the Council failed to intervene in the price of milk, prompting criticism from farmers’ groups. IFA president Eddie Downey said that a floor price needed to be set for milk. He also called on the EU to act on the issue of below-cost selling by retailers.

“It is critically important that the Commission step up with a strong declaration that Europe will ban below-cost selling of food and address the excessive input costs imposed on farmers,” he said in Brussels.

Asked about the decision not to raise the intervention price, Fernand Etgand, agriculture minister of Luxembourg, which holds the rotating presidency of the Council of the European Union, said he had taken note of the request of some member states, including France, for a temporary increase in the intervention price which would be discussed at next Tuesday’s informal agriculture meeting. “This debate is far from reaching its conclusion,” he said.

Monday’s emergency meeting of EU agriculture ministers had been called to address the fall in dairy and other grain and livestock sectors. The impact of Russian sanctions, the slowdown in the Chinese economy and the abolition of EU milk quotas earlier this year have resulted in a dramatic fall in milk prices. According to Teagasc the price of milk has fallen from a high of 39 cents in April 2014 to 25.5 in July 2015.

Speaking after the meeting, Minister for Agriculture Simon Coveney welcomed the announcement by the EU Commission of a €500 million aid package but called for clarification on how these funds will be distributed between Member States. “The important issue now is to clarify as soon as possible how these funds are going to be disbursed to Member States. We also need to know complete details of the measures the Commission is envisaging to support the market.”

Farmers have been protesting across Europe over the past month over falling prices in the dairy and pig meat sectors, with high-profile demonstrations taking place in Belgium, France, Germany and the Baltic States.

1 How long can Government afford to keep State pension age at 66?
2 Marquees and fleets of delivery vans: how supermarkets are ready for Lockdown 2
3 Brexit: UK and EU agree to intensify talks in rush for deal
4 Central Bank has reported ‘suspected criminal’ tracker offences to Garda
5 Deutsche Bank says Irish borrowers face long wait for lower rates
6 An Post letter business collapsing under Covid-19 - CWU
7 Irish start-up Wayflyer raises €7.8m in seed funding
8 Buckley bid to have INM inspectors withdrawn ‘a circus’, court told
9 Fair deal? Family at odds with hospital and each other not so sure
10 Ulster Bank tells ‘deeply concerned’ Minister no decision yet on future
Real news has value SUBSCRIBE