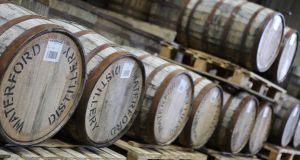 Waterford Distillery undertook its first distillation in December. It is aiming to distil 1 million litres of spirits this year, increasing this to 3 million litres within five years

A company led by the man behind the renaissance of the highly regarded Scottish whisky distillery Bruischladdich, spent just €7.2 million to acquire a former Guinness brewery in Waterford that was previously valued at €40 million.

Waterford Distillery, which was founded by Mark Reynier in 2014, bought the site from Diageo in November 2014 and has invested a further €2.4 million in converting the facility, according to recently filed company accounts.

Diageo, which originally acquired the Grattan Quay site in 2004, spent €40 million upgrading the facility before closing down production at the site in 2013 and selling the premises for a fraction of its cost to Renegade Spirits, a year later.

Renegade Spirits is a holding company set up by Mr Reynier, who acquired the abandoned Islay distillery Bruischladdich for £6 million from Jim Beam in 2000. After successfully resurrecting the single malt whisky and introducng a range of new products such as Botanist Gin and Islay Barley, he sold the company to Remy Cointreau for £58 million in 2012.

Former senior Elan executive and Waterford man Séamus Mulligan, who successfully merged Azur Pharma with the Nasdaq-listed Jazz pharmaceuticals in a $500 million deal in 2011, is among those to back Mr Reynier’s newest project.

Waterford Distillery undertook its first distillation in December. It is aiming to distil 1 million litres of spirits this year, increasing this to 3 million litres within five years. In addition to the distillery, there are also plans to build a museum and visitor centre at the former brewery.

Commenting on the accounts, Mr Reynier said the figures came in as expected with the company not “selling anything to anybody and not intending to do so for several years.”

Mr Reynier said he was very pleased with the transformation of the brewery, which had come in on budget. He said construction of a new warehousing complex at the site is now underway and should be operational by the end of the year.

A note included in the accounts said the company is currently “seeking to secure long-term funding of its working capital requirements from its bankers.”

Mr Reynier reently said that Renegade, which has more than 50 private backers, has €17 million in equity and would have a similar amount in debt available from HSBC.