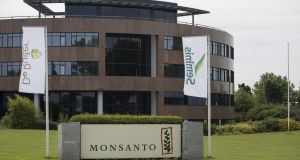 Banners fly outside the offices of De Ruite and Seminis, the vegetable seeds division of Monsanto in the Netherlands. Photograph: Jasper Juinen/Bloomberg

Bayer raised its offer for Monsanto in a bid that values shares of the US company at $54.7 billion after being rebuffed in its initial efforts to combine operations and become the world’s biggest supplier of farm chemicals and seeds.

The proposed price was increased to $125 a share in cash, and Bayer also offered paying a “reverse antitrust break fee” of $1.5 billion, according to a statement on Thursday.

Monsanto’s equity had been valued at $53.4 billion under the initial terms of $122 a share. Its stock rose in New York trading.

The increased price may make a takeover more palatable for Monsanto shareholders while simultaneously stoking concerns among Bayer investors about the deepening financial strain on the German company.

Buying Monsanto would give Bayer a controversial pioneer of crop biotechnology that is reviled in Europe.

Monsanto has revived talks with BASF SE about a possible combination of their agrochemicals businesses, people familiar with the matter said this week.

The US company is exploring various transactions, including the potential acquisition of BASF’s agriculture-solutions unit, the people said, asking not to be identified as the discussions are private. – Bloomberg