Noel Haverty the hero as Longford inch closer to safety 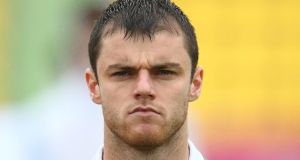 Longford Town 1 Noel Haverty headed an equaliser before then clearing off the line as Longford Town edged a point closer to safety against 10-man Bohemians at Dalymount Park.

Though Bohemians started well, it was Longford who created the better chances early on.

Kevin O’Connor shot wide before Dean Kelly did likewise from a free kick. Stephen Rice might then have done better than lob over the bar after Rhys Gorman picked him out from a 28th minute free kick.

The game’s first shot on target finally arrived four minutes later. Bohemians’ striker Ismahil Akinade did well to power through after an exchange with Paddy Kavanagh to turn and shoot straight at Longford goalkeeper Paul Hunt.

A minute later, Longford’s Pat Sullivan headed off the line after Akinade had bounced a header goalward from a Lorcan Fitzgerald free kick.

Three minutes later, though, the home side were ahead from a sublime solo strike from Paddy Kavanagh, who cut in from the right to rifle a left-foot shot to the net from distance.

But poor defending from a corner brought a soft equaliser right on 45 minutes when right-back Haverty looped a header to the net from Ayman Ben Mohamed’s delivery.

Haverty then showed his defensive quality to make a terrific clearance off the line from an Akinade header five minutes into the second half.

Back at the other end five minutes later, Dean Kelly came within inches of capping his 30th birthday with a goal as his shot shaved the outside of Dean Delany’s right-hand post.