Michael Walker: France ’98 was not a beacon of hope. It was merely a football tournament

Between World Cup and Euros, France has experienced 18 years of disconnection 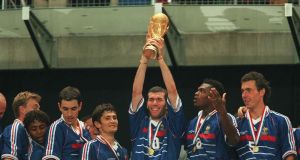 The sunlight in Montpellier, the food in Lyon, the stadium in St Etienne, the atmosphere in Paris.

And at its end: Zinedine Zidane and Ronaldo in the Stade de France.

The World Cup of France ’98 left a torrent of strong, overwhelmingly happy images. It still feels, in Martin O’Neill’s mot du jour, “special”, and the thought of two Irish teams in France for Euro 2016 next summer has rekindled memories of a tournament that possessed some magic.

In Lyon there were huge portraits of players attached to the riverbanks. Lyon – what a town. When not covering a match in the city, we’d go, like many of the rest of Lyon, across the bridges into the old square and watch games on a giant screen.

Naturally France games were particularly exciting, even if some of the French football was not.

Through the group stage we were still debating whether France really was a football nation and in the first knockout match it was 0-0 against Paraguay until well into extra-time. Then Laurent Blanc scored in Lens, it was 1-0 and onto Italy in the quarters. That was 0-0 the whole way to penalties.

Then Blanc did it again. If France was not a football nation, it was becoming one.

They had Croatia in the semi-final. The Croats were in their first World Cup following the dissolution of the old country of Yugoslavia – though Yugoslavia, the team, remained and were in France too.

Suker and Slaven Bilic were some of the names of the tournament and Suker scored against Fabien Barthez to give Croatia the lead. Then Lilian Thuram equalised. In a team containing creative forces such as Zidane and Youri Djorkaeff, the defenders were getting the goals. Proof came when Thuram scored a second against Croatia, the winner, and France were in the final.

French angst in those days concerned Stéphane Guivarc’h – a bit like Fred did for Brazil at the last World Cup. Nominally France’s number nine, Guivarc’h would go through France ’98 without scoring. Thierry Henry and David Trezeguet were there, but they were young substitutes. They did not make the final.

Guivarc’h did. Christophe Dugarry replaced him this time, though it was with France 2-0 ahead against Brazil with two goals from Zidane. In the 90th minute Emmanuel Petit made it 3-0 and France had won the World Cup.

To be at the match, the stadium, to be in Paris that night, was unforgettable. The place was in joyous uproar and when it settled down in the days after, it was to read and speak of a new France, a France of diversity as represented in the faces and backgrounds of men like Thuram, Djorkaeff and Zidane. It was called a Rainbow Nation and while some might not have fully believed in it, it felt like a lot wanted to.

As France’s coach Aime Jacquet said later: “Sport is played with companions – and it is therefore naturally all about integration. Some people don’t want that, but that’s their problem.”

Last year Marcel Desailly reflected: “After the quarter-final we really felt that the country was behind us. We couldn’t avoid seeing what was going on when we went through towns and estates on the team bus. Africans, Algerians, Arabs and Moroccans were all at their windows with French flags. They were mixing with French people.

“It was amazing to see the way a big competition like the World Cup can unite people.”

Times change. Within four years Jean-Marie Le Pen was calling the France ’98 team “artificial”. In 2005 there were riots in the Parisian suburbs where once there had been celebrations. By 2014 Andrew Hussey could publish a book called The French Intifada: The Long War Between France and Its Arabs.

Hussey, who lives and works in Paris, has quoted Martin Amis’s response to September 11th in the past few days, writing: “For Amis, 9/11 was not just an atrocity but the spectacle of an atrocity.”

Hussey has wondered for some time if France realises the disaffection within. It knows now and French angst is not about football, but about the spectacle of football and how it can be abused.

The attempted suicide bombers at the Stade de France are evidence of that. The grim spectacular of Islamic State imagination was foiled, but that does not mean France, or elsewhere, can relax.

It turns out France ’98 was a football tournament. It did not change the world. It did not mark a New France. Between the World Cup then and the Euros to come are 18 years of disillusion and disconnection felt by those who thought they were part of a coming together but who discovered via financial, cultural and geographic separation that, for all Zidane’s symbolism, not enough changed for them.

The fact we had written and spoken of integration told of a divide. It’s there in Marcel Desailly’s description – “They were mixing with French people.”

Real change is substantial, not symbolic. We were all guilty, guilty of wishful thinking.

Maybe it was the sunlight in Montpellier.

In another realm, I once met Jamie Vardy in a rugby club outside Blackpool. I was there because that’s where Fleetwood Town trained. It was four years ago this month.

Vardy, then 24, was cocky – likeable cocky – and re-told his story of working in a Sheffield steel factory while playing non-league, how he had to wear a police tag around his ankle – “I’d been out with a friend who wore a hearing aid and two lads thought it would be funny to start mocking him and attacking him. I’m not proud of what I did but I defended him. It got me in trouble.”

A year after this, Fleetwood sold Vardy to Leicester for £1m and now he plays for England and is said to have Barcelona watching.

He scored five Premier League goals last season; this season Vardy has scored in nine league games in a row and, at Newcastle, can equal Ruud van Nistelrooy’s Premier League record of scoring in 10 consecutive matches for Manchester United.

After that, Stan Mortensen’s 15 in 1950-51 is a target. Mortensen was pre-Premier League of course.

Some need reminding football existed then.