Dutch master was a visionary whose ideas revolutionised the global game 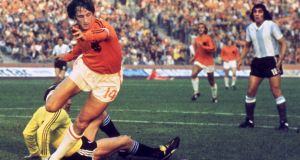 Johan Cruyff dribbling past Argentina goalkeeper Daniel Carnevali on his way to scoring a goal during the World Cup quarter-final on June, 26, 1974 in Gelsenkirchen in Germany. Photograph: AFP/Getty Images

Johan Cruyff, who has died in Barcelona aged 68, was the greatest European footballer of all time. He was also the principal architect of the modern European style of play, and a transformative icon who reinvented the image of his country at home and around the world.

The post-war Amsterdam in which Cruyff grew up was a staid, grey city haunted by guilt, denial and decline. Out of this dreariness rose a brilliant symbol of youth, freedom and creativity in the form of Cruyff and the Total Football of which he was the incarnation. For the first time in 300 years, the Netherlands began to think of itself again as an example to the world.

You could say Cruyff was football’s answer to his contemporary, David Bowie. But he was also its Karl Marx, a visionary whose ideas revolutionised the sport. He was the most brilliant thinker on football who also happened to have been a brilliant player.

“Football consists of different elements: technique, tactics and stamina,” he told the journalists Henk van Dorp and Frits Barend, in one of the interviews collected in their book Ajax, Barcelona, Cruyff. “There are some people who might have better technique than me, and some may be fitter than me, but the main thing is tactics. With most players, tactics are missing. You can divide tactics into insight, trust and daring. In the tactical area, I think I just have more than most other players.”

Marco van Basten thought the difference between Cruyff and everyone else was that Cruyff was already thinking about tactics at a stage when most players were still mastering the basics. “Johan was so technically perfect that even as a boy he stopped being interested in that aspect of the game. He could do everything when he was 20. That’s why he’s been very interested in tactics since he was very young.”

There is a clip on YouTube that gives a glimpse of what Cruyff means when he talks about ‘tactics’. It’s one of those Dutch TV shows where middle-aged men sit around talking football. Cruyff is standing at the blackboard explaining how to play 3-4-3.

“When you get the ball, the left-winger moves forward, and the striker moves right. And that’s when this one, the side-back-” (he indicates the furthest left of the three central defenders) “he starts to move forward, here. You’ll achieve two things.”

The host needs to go to ads and tries to interrupt: “Professor, considering the time...”

“No no no no no! No, listen. The moment you do that, you achieve two things. That’s why these side-backs used to be wingers – they were good footballers, like Sergi, or Reiziger. So they would run...” (Cruyff draws a diagonal line, showing how the left of the three centre backs moves forward into a left midfield position) “You achieve two things.”

“If this striker-” (Cruyff points at the opposing centre forward with his chalk) “If this striker doesn’t respond, then his whole team would start to complain, the coach included. And secondly, if he does run back, after 10 of those runs he’d be wrecked, and no longer dangerous offensively.”

Everyone laughs. They’ve all assumed Cruyff is about to make some spatial point – to show how the run would draw an opponent out of position in a kind of footballing peg solitaire.

Instead it’s a double-edged psychological ploy: either expose the opponents’ dishonesty and set them at war with each other, or take advantage of their honesty to tire them out.

Reading through the old Cruyff interviews, you’re struck by his fascination with energy and its conservation. He said: “Football is a game you play with your mind,” but few footballers have ever been more conscious of the need to marshal the limited resources of the body. The position-swapping of total football was really all about energy efficiency.

“If you have a midfield player who comes into the attack and then has to run back 80 metres, well, he can do that three times and then you may as well forget about him, he has to take a rest,” Cruyff said. “You need to be practical all the time. It’s better if the same player only needs to run 20 metres, or you can make it even less by saying: come back slowly because I’m already there and I only have to run five metres to take care of his position, so he only has to run back 10 metres. It means you can keep going longer.”

He was a great originator of sayings. “Every disadvantage has its advantage.” “The press mixes up speed and insight. If I start running before you, I look faster.” “Before I make a mistake, I don’t make that mistake.” “Football is simple, but playing simple football is the hardest thing.”

The flair for paradox reflects a mind whose natural instinct was to turn things upside down.

Cruyff was so sure of himself that he would confidently espouse ideas more conventional coaches would have regarded as utter madness.

During the 1990 World Cup, he was unimpressed by Leo Beenhakker’s tactics during the Netherlands’ 1-1 draw with Egypt, and gave an interview describing what he would have done instead.

He would have left the captain, Ruud Gullit, on the bench. He would have played a “demolition man” – a hard-running striker like Wim Kieft – up front with Marco van Basten. He would have told the team to pressure Egypt in their own half, to expose their relative lack of technical quality. He would have played two wingers, who would have been instructed to put 20 balls into Egypt’s box in the first half hour. Ten of those balls would end up being cleared to the edge of the box, so he would have asked the central defender Ronald Koeman, who happened to be the best shooter in the team, to play behind the strikers. After 40 minutes, with Egypt reeling from the high-tempo onslaught, he would have brought on Gullit to finish them off.

To recap: captain dropped, central defender behind strikers, a planned first-half substitution. Cruyff might not always have been right, but nobody could ever accuse him of lacking originality or balls.

His great disappointment was the Netherlands’ defeat to West Germany in the 1974 World Cup final. Later he would argue that the Dutch were the real winners of that World Cup, since they were the team that everyone remembered: “There is no greater medal than to be acclaimed for your style.”

Back in the 1990s, van Dorp and Barend could still ask Cruyff: “Results and idealism are really opposites, aren’t they?”

In the end, the medals came. The Barcelona, Spain and Germany teams that have dominated club and international football for a decade are the children of Cruyff. They’ve proved to the world what was always obvious to Cruyff: the most beautiful way to play is also the best.