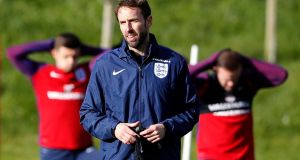 England interim manager Gareth Southgate during training ahead of the side’s clash with Scotland at Wembley Stadium Photograph: Carl Recine/Reuters

There was a point when Gordon Strachan was hoping to persuade Andy Murray to deliver some words of inspiration before Scotland’s players walk out at Wembley on Friday night. Not that Gareth Southgate seemed too concerned when it was brought up in his company before England’s final training session.

“Unless he is playing at left-back he is not going to affect the game,” England’s caretaker manager pointed out. And that was the moment one of the Scottish journalists at the back of the room interrupted. “I wish he was,” came the response.

This is what England will come up against when the two old rivals renew acquaintances in the World Cup qualifier that will almost certainly determine whether Southgate gets the job full-time.

The invasion of London is already under way but, as Craig Brown once noted: “Bagpipes, war paint and claymores won’t win us games in the European Championship or World Cup.”

Scotland have gone 18 years, and counting, since they last made it to a tournament.

Murray has sent his apologies – too much on elsewhere, apparently – and Scotland’s current position in Group F can be summed up by the opening line of Strachan’s acceptance speech when he was inducted into English football’s Hall of Fame last month.

It was a great honour, he said, bearing in mind he was starting to think he might be kicked out of the Scottish one.

Not that England’s position at the top of the group means, post-Euro 2016, they can gloat. Southgate was asked at one point whether he could understand why the general public had grown weary of his team.

He can resort to his own dark humour when it comes to England’s diminished reputation and it was tempting to wonder if he saw Chris Kamara’s appearance on Have I Got News For You recently.

Kamara was introduced as someone who was “famous for not knowing what’s happening on the pitch” – and, therefore, a worthy candidate to be the next England manager.

Perhaps, in time, Southgate would like to think he may be able to shift that perception but, first things first, he needs the kind of performance that would make things an awful lot easier for the decision-makers within the English Football Association. Southgate’s spell began with a plodding 2-0 win over Malta. England, by his own admission, were lucky to get away with a goalless draw in Slovenia.

Now, however, there has to be an improvement when the understanding from the start has been that the Scotland game, followed by the one against Spain on Tuesday, will decide if he continues in the role. The alternative is that Southgate would revert to managing England under-21s.

“It would be different,” Southgate reflected. “This has been a brilliant experience but I have said to various players that ‘maybe you are in the first team for a while but then you have to go back to the under-21s’, so it would be a bit hypocritical of me to say that personally I’m too big to do that. They have an under-21 championships to prepare for and it is an exciting challenge.”

Not as exciting, though, as a World Cup for a manager who can remember applying for various jobs in the Championship a few years ago and, more than once, not even getting a reply. Southgate’s strategy has been not to state whether he wants the role full-time.

Everything, however, indicates he does and it is clear he is already trying to change attitudes behind the scenes.

One discussion he initiated this week was about the true meaning of the word leadership and encouraging players out of their comfort zone.

“It’s easy to have those sessions where people say: ‘We’ve got to be professional’ or ‘We’ve got to be leaders.’ Well, what does that mean? Let’s go further. We are trying to get the guys talking more, expressing themselves more.

“Initially, the players are uncomfortable speaking up. But it’s easy to be fluffy. Let’s make our level of analysis deeper.”

Those moments demonstrate Southgate’s understanding that the art of coaching should not be restricted to the training pitch and there are other sides to him that are also becoming evident – for starters, his loyalty to his players, expressed in response to Graeme Souness’s remarks that the two nations had never met in a greater state of disrepair.

“I think sometimes there are rose-tinted spectacles about the teams both countries have put out over the years,” Southgate said. “We forget some of the turkeys. It’s like the summers of our youth – we remember the hot ones but we don’t remember the ones where we were sat in front of the telly, do we?”

Southgate is depicted sometimes as too gentlemanly to be a manager when, in reality, he agrees with Wayne Rooney that England can be “too honest” and wants a more streetwise edge.

“The classic example was when Harry [Kane] nearly got decapitated against Portugal [when Bruno Alves was sent off for a high kick] and tried to keep going. A lot of feedback to me would be: ‘It’s a joke if you’re telling him to go down and get the other player sent off – it’s not British.’

“I’d be one of the first, at the right moment, to do the right thing. But we are on the pitch, we want to win and there is a competitive edge. I don’t encourage players to cheat but, if somebody fouls us and it should be a card, sometimes you have to make sure that decision is taken.

“If a player is kicked and hurt, just to bounce up and shake hands – I don’t know if that’s the rules the rest of the world are playing by.

“We are going into tournaments and qualifiers where it is a hard, fine line. I know that won’t be a popular opinion but I’ve been involved in matches like in St Etienne in 1998 where some of those things have swung the game. Nobody turns around and says: ‘Oh well, we did the right thing and what a shame.’”

These are the kind of instructions that take time to implement. Southgate should know in the coming days whether he will get that time and he sounded notably more confident than he had done before his previous two games.

“I have to say it must have been very difficult for the players with three coaches in the last four matches, all with a different idea of how they want to play. But I do sense there is more clarity this week.”

1 Dan Tuohy explains ‘rotten to the core’ comments
2 Six Nations: No place to hide for Ireland’s misfiring captain
3 From stationary carriers to centres of excellence - five things we learned
4 England 24 Ireland 12: How the Irish players rated at Twickenham
5 West Ham rue Fabianski fumble as Liverpool strike from behind
Real news has value SUBSCRIBE
Crossword Get access to over 6,000 interactive crosswords