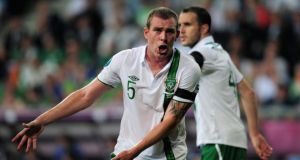 Richard Dunne: “Retiring from international football has been an extremely difficult decision for me to make.”

After 14 years as Ireland’s last line of defence, Richard Dunne has decided that the time is right to bring down the curtain on his international career.

Back on home soil with his club Queens Park Rangers as they continue their pre-season preparations with friendlies against against Shamrock Rovers and Athlone Town, Dunne announced last night that he will not be available for the forthcoming Euro 2016 qualifying campaign and that last October’s appearance against Kazakhstan was his last in a green jersey.

“Retiring from international football has been an extremely difficult decision for me to make,” Dunne said in a statement. “I have represented Ireland since I was 15 years of age, and have thoroughly enjoyed all the highs and lows that have come with playing for my country. I will continue to support the team as they embark upon their new campaign under Martin O’Neill, and have every faith that they will qualify for France 2016.

“I’d like to thank everyone I worked alongside during my time with Ireland, from managers to players to backroom staff. A special mention also goes to the fans. Their support has been immense, and I will always be grateful to them. I have so many great memories, that will stay with me forever.”

Rightly regarded as one of Ireland’s greatest ever defenders, alongside the likes of Paul McGrath and Kevin Moran, Dunne’s career will always be best defined by his heroics in Moscow where he almost single-handedly kept a rampant Russia side scoreless. But his contribution to the Irish side was so much more than that over the years, and Ireland’s defensive fragility in his absence leaves manager Martin O’Neill with big boots to fill.

Having swiftly established himself as a regular after making his debut against Greece in 2000 Dunne played a major part in getting the country to the 2002 World Cup finals, not least during the 2-2 draw against the Netherlands in Amsterdam. The then 20-year-old inexperienced Everton defender put the shackles on Dutch striker Patrick Kluivert in a performance that introduced himself on the international stage and set the tone for Ireland’s progress to the finals.

However, when manager Mick McCarthy decided to switch Steve Staunton from his customary full back role to the heart of his defence, Dunne found himself out of favour and failed to make it off the bench in Japan and Korea.

Dunne, who occasionally had problems with his fitness early in his career, would go on to be become a mainstay under a succession of Irish managers, establishing himself as the glue that held the Irish defence together. Operating in front of Shay Given, his aerial presence, acceleration and drive saved Ireland on countless occasions.

His performance in Moscow in 2011 was freakish, subsequently becoming known as Dunne’s ‘Iron Curtain’. Dunne was imperious as Ireland earned a draw at the Luzhniki Stadium - a point that was crucial in helping the country to Euro 2012. Time and again he threw himself in front of Russian attacks, a nasty facial injury not enough to keep him from the fray.

“He was fantastic. I thank God that we had Richard in this game,” manager Giovanni Trapattoni said at the time. He sacrificed himself because he went back on to the pitch with four stitches. He understood the need to stay on the pitch . . . I told the players St Patrick was looking down on us tonight.”

Dunne’s injury concerns - he missed almost an entire season after the Euros with a persistent groin problem - curtailed his international appearances over recent years but having helped QPR gain promotion to the Premier League, Dunne had indicated his intention to soldier on for one last campaign in a green jersey.

Speaking at the end of last season, Dunne said he would love to be considered for Ireland’s Euro 2016 qualifying campaign. But having had time to reflect over the summer, the Queens Park Rangers centre-half has made the decision to concentrate solely on his club career as he prepares to return to the Premier League.

O’Neill, who also worked with Dunne when they were both at Aston Villa, accepted his decision, saying last night: “Richard has been a remarkable player for both club and country. I had the pleasure of working with him at Aston Villa, where he had a big influence on the field. He has consistently given 100 per cent every time he has been called on by his country also. I wish him all the best in his club career.”