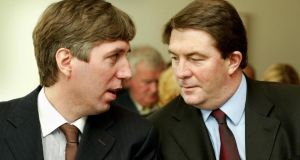 Former FAI CEO Fran Rooney with current CEO John Delaney. Rooney says the FAI need to reveal details of a €5 million Fifa payment made out to them five years ago. Photo: Morgan Treacy/Inpho

Former FAI chief executive Fran Rooney says that the association must reveal the full details of the of the €5million Fifa payment made to the FAI in 2010.

Current FAI CEO John Delaney claimed that the money was in settlement of a legal dispute arising out of the Paris World Cup play-off incident, but he failed to elaborate on how a refereeing error could have given rise to any such claim.

“All decisions in football are final, and it didn’t stop us going to the World Cup. It stopped us from getting a penalty shootout” Rooney told RTE.

“In some ways it was a good deal, but it’s not about the deal, it is about how it is presented and disclosed to the public and the international arena.

The payment has been condemned as “a joke” by the head of German football. Wolfgang Niersbach, the president of the German football federation and a Fifa executive committee member, spoke out after the world governing body admitted to making the payment as compensation to the Irish.

The Fifa payment, initially a loan they claim, was agreed in return for the FAI not taking the case to court. Had Ireland qualified for the 2014 finals they would have had to pay the money back. Niersbach told German television station ZDF: “It is a joke that they paid this money out to stop the Irish taking them in front of court.” France beat Ireland in the 2009 play-off 2-1 on aggregate.

Tanaiste Joan Burton said she found the story “intriguing”. She added: “Particularly the meeting where you have a few hot words and leave with €5 million in your pocket.”

Former Republic of Ireland player and assistant manager Liam Brady also says that neither he nor any of the management team or players at the time were aware of any payment.

The former Arsenal midfielder who was a part of then-manager Giovanni Trapattoni’s set-up says that revelations of any payment (or loan) made to the FAI following the incident which abruptly ended Ireland’s 2010 World Cup qualification hopes, were “mind-boggling”.

“I knew they were under pressure to kind of compensate us somehow after the incident in November 2009, but I didn’t realise that the FAI got as much money as they did,” Brady told RTE Radio.

“I think FIFA are saying it is a loan to do with the Aviva Stadium from what I can gather. John Delaney is telling a different story. I’m sure this story is going to going to go on and on for a little bit longer.”

Meanwhile on Friday morning a new letter has emerged regarding the $10m payment from South African officials to Jack Warner prior to the 2010 World Cup, described by US investigators as a bribe.

If the letter published by the South African Mail and Guardian is to be legitimate, Danny Jordaan the head of the South African Football Association, wrote to Fifa General Secretary Jerome Valcke in 2007 requesting that $10 million be deducted from the 2010 World Cup Local Organising Committee’s budget and paid to a diaspora legacy fund.

It suggests that Jordaan discussed the payment with at least two then government ministers – one of whom has already denied the claim;

“The South African government has undertaken to pay an amount equivalent to US$10m towards the 2010 Fifa World Cup diaspora legacy programme,” so says the letter.

“The deputy minister of finance, Mr Jabu Moleketi, has recommended that this money be paid over to Fifa.

“I have subsequently had a discussion with the minister of foreign affairs, Dr Nkosazana Dlamini Zuma, who has said that the funds should rather be paid over to the 2010 Fifa World Cup organising committee South Africa.

“In view of this determination, I want to suggest that Fifa deducts this amount (US$10.0m) from the LOC’s future operational budget and deals directly with the diaspora legacy support programme.”

Moleketi claimed on Thursday that the letter was “a fabrication”.

Outgoing Fifa president Sepp Blatter will not attend an International Olympic Committee meeting next week, the IOC have confirmed. An IOC official told Reuters the decision was made some weeks ago.

As president of Fifa, Blatter is also an IOC member.