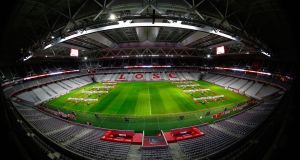 Lille tops the list compiled by hotel search website Trivago of year-on-year room price hikes but Irish and Italian fans are being hit hardest of all with beds on the night the two sides face each other now costing an average of €559 compared with just €106 at the same time of year in 2015, an increase of some 427 per cent.

Many rooms in the city had been booked up in advance by agencies while the majority of the rest were snapped up immediately after the identity of the teams that would play there became known, but not everything is gone if your pockets are deep enough.

Properties available through the website yesterday included a poorly reviewed apparthotel for €280 on the night of the Italy game as well as the very impressive five-star L’Hermitage Gantois, for €780.

Deterred by the extortionate prices, many Ireland fans have opted to stay in Paris or Brussels and take trains in and out. Trivago is recommending Kortrijk, a town 50 kilometres away, just over the border in Belgium where the hotels are still affordable, according to the company.

Ireland’s other games are also the subject of opportunist pricing by local hoteliers with rooms in the general vicinity of Saint Denis on the night of the Sweden game averaging €285 at present, or just over twice what they were at the same stage of 2015 while the increase in Bordeaux on the night of the Belgium game is slightly higher at €312 compared to €144, or 117 per cent.

In both instances the impact of the games is softened by the generally large number of existing hotel beds, due to a traditionally vibrant tourism industry.

Recent studies have shown that increases in demand for accommodation caused by major sports events in such destinations tend to be tempered by other visitors delaying trips or choosing alternative destinations.

Bordeaux, meanwhile, is less dramatically affected than cities such as Lyon. In addition to its many hotels rooms, the host city for Ireland’s game against Belgium is located in a region that contains many towns and resorts used to hosting large numbers of visitors in alternative forms of accommodation such as campsites or holiday villas.

The fact that hoteliers are taking advantage of the tournament is no great surprise.

The same happened in Cardiff last year when prices soared tenfold during the rugby World Cup and in Dublin a decade ago when the Ryder Cup was hosted at the K Club.

The issue is currently a pretty topical one for supporters of Connacht and Leinster, who are heading to Edinburgh for this week’s Pro12 final with prices there already hugely inflated by the fact the city is hosting a marathon too.

Inspirational Burke points the way as Dublin clear opening hurdle 16:35
A changing of the seasons as Minella Indo lines up at Wexford 15:40
Lewis Hamilton makes history in Portugal with 92nd GP win 15:45
Celtic slip up again as Aberdeen strike late in pulsating draw 14:40
GAA discourages the use of team buses when travelling to matches 11:25

1 Seán O’Brien: Anger over my parents’ break-up never left me
2 Hugo Keenan and Will Connors: The best of friends, the best of debuts
3 Ireland get the job done against Italy to keep alive Six Nations hopes
4 Ireland 50 Italy 17: Ireland player ratings
5 Unbeaten Khabib to retire after UFC 254 win over Gaethje
Real news has value SUBSCRIBE
Crossword Get access to over 6,000 interactive crosswords