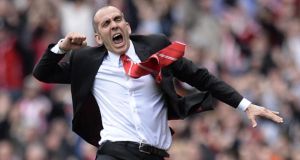 After RTÉ’s decision to discontinue the Premier League highlights show, Setanta Sports has announced it will fill the void left by the national broadcaster’s cost-cutting measures.

Setanta Ireland will air two shows, one on Saturday evenings (8.30pm) and one on Sundays (10.30pm), each weekend for the duration of the new season, starting this week when host Conor Morris will be joined by Matt Holland and former Arsenal left-back Nigel Winterburn.

The Sunday show will be hosted by Newstalk’s Ger Gilroy for the first two weeks before Paul Dempsey takes the reins thereafter.

“The addition of a Premier League highlights show every Saturday and Sunday is another statement of our renewed commitment to Irish Premier League fans,” said marketing operations director Brian Quinn today.

“When the rights became available we were determined to make sure that Irish football fans wouldn’t miss out on getting a highlights programme with an Irish angle.”

Setanta recently added newcomers BT Sport 1 and BT Sport 2, as well as the ESPN channels, to their sports pack.

“From a production perspective it is a big challenge for this first weekend as we have only just concluded the deal,” added Quinn. “Thankfully we have a lot of resources in place for our live Premier League shows that we can use on the new Premier League Central show. Viewers can expect changes as the weeks go by and each week we will draw from a varied line-up of analysts including names like Tony Pulis, David May, Gus Poyet and Gary McAllister.”

1 Seán O’Brien: Anger over my parents’ break-up never left me
2 Robbie Henshaw likely to be the only Irish change for France finale
3 Drogheda United finally on the up and up after dramatic night
4 Cian Healy: ‘Realistically I got away with murder when I was younger’
5 Bartomeu resigns and drops bombshell of Barcelona joining European Super League
Real news has value SUBSCRIBE