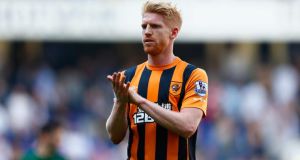 Hull City have released six players following their relegation from the Premiership, and among them is Irish defender Paul McShane.

Manager Steve Bruce said it’s with much regret that the club part ways with one of their longest serving players. The former Manchester United, Sunderland and West Brom defender has been with Hull since 2008.

Meanwhile fellow Irish international Stephen Quinn has been offered a new deal to extend his stay at the KC Stadium further.

“Regrettably, following relegation, we have made the decision to release the majority of those players whose contracts have expired,” said Bruce.

“We would like to place on record our thanks for the service they have given to the club, particularly our two longest serving players Liam Rosenior and Paul McShane. Both players have been outstanding for us and they leave with our very best wishes for their futures.

“The aim now is to retain as many of the remaining squad as possible and look to add some new faces this summer as we bid to compete at the top end of the Championship and bounce straight back into the top flight”.

The other five out of contract players let go by the club were Liam Rosenior, Yannick Sagbo, Maynor Figueroa, Steve Harper and Joe Dudgeon.

McShane made 136 appearances for the Tigers and scored five goals, including the one which effectively sealed promotion back to the Premier League against Cardiff in 2013.

He played in 23 of the team’s games this season, playing the full 90 minutes in Hull’s final day 0-0 draw with Manchester United. He had though missed out on much of the mid-season action after a row with Bruce led to him being forced to train with the club’s Under-21 team.

Bruce’s son Alex, also a central defender, has been offered a new deal along with Quinn.

At 29-years-of-age McShane will spend his summer looking to sign on with another top flight team in the hope of adding to his 31 international caps.