Mourinho and United a perfect match in ratings game

Having won 21 major trophies in four different countries, is José Mourinho a good fit for Manchester United? We take a look at the glittering CV of the self-proclaimed 'special one'. 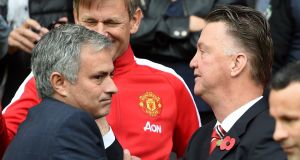 Out with the old, in with the new: Jose Mourinho and Louis van Gaal. Photograph: Martin Rickett/PA Wire.

On Saturday Manchester United won the FA Cup, but that was the second-biggest story about the club in the world’s media, behind the news that Jose Mourinho is about to replace Louis van Gaal as manager.

Some saw this as an example of everything that’s wrong with modern football and the media that cover it. But it’s also a graphic illustration of why the logic of appointing Mourinho proved so beguiling to the decision-makers at Old Trafford.

To the people who control United – the Glazer family and their executives Ed Woodward and Richard Arnold – the purpose of the club is to make money. And the way it makes money has changed.

Until the Premier League era, United’s income chiefly derived from the crowds who turned up every other week at Old Trafford. Gate receipts were closely tied to football performance. United first became England’s best-supported club in the late 1950s, thanks to the fame of the Busby Babes. After sliding down the attendance charts in the early 1960s, they regained top spot when the second great Busby side won the league and European Cup. The better United played, the more money they made.

In the 1990s a new stream of money started to flow in from television, first via the Premier League’s deal with Sky, and then through the Champions League television pool. Television income was also broadly performance-related. The higher United finished in the league, the more they earned from Sky, and they had to finish at or near the top of the league to access the European television money.

The year 2016 is projected to be the first in which more than 50 per cent of United’s income derives from commercial sources – sponsorship deals, merchandising and the new growth area of “mobile and content”.

This is a significant tipping point. For the first time, United’s income is not primarily derived from their own business activity, but from their usefulness as an advertising platform for other businesses.

Manchester United started as a football club that made most of its money by selling football matches to a paying audience. That is now a secondary part of the business. United’s most important customers are no longer the audiences that pay to watch the football, they are the corporate partners who pay to be associated with the brand. And the most valuable thing that United sells – the company’s primary product – is no longer the football. It is the audience itself.

Richard Arnold has described the club as “the biggest TV show in the world.” The analogy of a television show is useful in grasping United’s metamorphosis. You can think of “the football side” as the content of the show, the soap opera plot points and storylines. Will Deirdre choose Ken or Mike? Will they find Trevor Jordache under the patio? Who shot JR?

These questions are what interest the viewers, but the producers think about the show from a different angle. The question they’re interested in is: will it get the ratings? Because the producers aren’t selling content – that’s what actors and writers and directors do. The producers are selling ratings.

Now that United are in the business of delivering ratings rather than trophies, questions such as “Shouldn’t we be slightly worried about the way Jose Mourinho’s last two jobs have ended?” or “Does Mourinho’s reactive football really fit with the Manchester United Way?” or “Does Mourinho’s reluctance to trust young players make him a bad choice for a club that has always taken pride in developing its own players?” no longer really matter.

The only question that counts is: will people around the world tune in to watch a Jose Mourinho-managed Manchester United? And the answer is clearly yes. A majority of United fans are pleased with the appointment, and even the ones who dislike Mourinho will find themselves irresistibly drawn to hate-watch.

Once everyone is tuning in, questions of philosophy and principle pale into insignificance. It doesn’t matter that Mourinho’s teams play on the counter. They also usually score a lot of goals. A lot of people these days don’t even watch full games, they watch the clips – in Arnold’s phrase, “consumable chunks of content that fans can engage with on the go.” Mourinho’s teams have always generated enough of those consumable chunks for his supporters to argue that they play the game the right way. If people noisily disagree over it, all the better for ratings.

Likewise, youth development must be seen in its proper commercial perspective. United could, for instance, decide not to buy a new centre forward, betting that Marcus Rashford will develop into a top striker. But what would be the point of that? They’ve hired Mourinho, who comes with his agent Jorge Mendes, globally renowned master of the transfer market. They can hardly be expected to refrain from flexing their new club’s financial muscle. That would be the kind of thing Arsene Wenger would do, and we know what Mourinho thinks of him.

As Mendes could explain, spending millions on players is part of the counterintuitive commercial dynamic of modern football. What is more exciting than a superstar signing? Spending in and of itself has become integral to the spectacle, part of what generates the buzz, the clicks, the shares, the likes, and the follows that sponsors trust the Manchester United brand to deliver. Such spending is also good for agents, but who could begrudge them a consideration for their role in keeping the dream factory running?

United is no longer the club that was built by Busby and Ferguson according to the sort of principles that would have been made sense to any 19th-century Scottish industrialist: thrift, efficiency, hard-work, long-term planning. The game has changed, and in Mourinho they will be appointing the perfect coach for their new purposes.